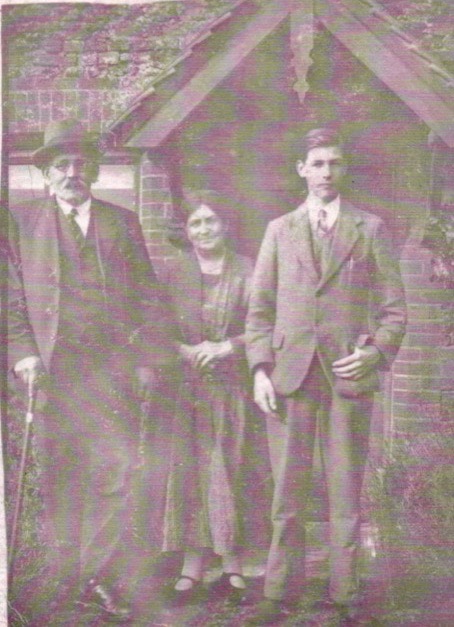 I am delighted to share some anecdotes by Penny Coe about her great uncle Harry Saward, Royal Station Master Extraordinaire.

Another great niece, Shirley Britten, shares her reminiscences- and wishes she had asked her mother, Beryl Saward, more about her distinguished relative who mingled with the royals.

The photo shows Harry and Sarah with grandson, Leslie Saward Heath, Ada’s son, whose life is fictionalised in The Royal Station Masters’ Daughters.

My mother referred on occasions to Uncle Harry “who was station master at Wolferton.”  Wolferton in Norfolk was the station which served Sandringham.  Only much later did curiosity led me to find out more about this relative, brother of my great grandfather.  Armed with family information that he had siblings and that his father, William, had been station master at Audley End for forty years, I spent time putting flesh on these ancestral bones.  Indeed Harry had siblings: one sister and eight brothers, and a half sister and two half brothers as, after the death of his wife Mary Ann, William,  Harry’s father, had married his housekeeper, marriage certificate testifies he was 70, she was 28!

Harry started working for the Great Eastern Railway in 1872 as a probationary telegraph clerk at Audley End, then became goods clerk and booking clerk there.  In 1877 he became booking clerk at Huntingdon, then Whittlesea in 1878, Downham 1879 and March 1880.  In the 1881 census, he appears twice, as a railway clerk, boarding with a railway colleague in March and as a visitor in the household headed by 21 year old *Sarah E. Hughes, a farmer of 72 acres.  Whilst at March, he worked as district relieving clerk and became stationmaster at Fordham where he stayed for only four months before becoming station master at Wolferton, selected for this prestigious position out of 120 applicants.  In June 1884 whilst at Fordham, he married *Sarah Elizabeth Hughes from Whittlesea.  She worked as waiting room attendant at Wolferton for over 40 years and as postmistress at Wolferton according to the 1901 census.  They had three daughters.

Harry retired from Wolferton in 1924 after what must have been an interesting and responsible career.  The retirement article in the Great Eastern magazine refers to him being “the proud possessor of quite a large array of medals”.  He and his wife then lived in the old Church Farmhouse at Wolferton provided by His Majesty the King.  Harry died in 1932;  the Lynn News and County Press tribute refers to the many sovereigns, monarchs and statesmen he received at the station and the high esteem in which he was held by distinguished visitors who passed through Wolferton, messages of sympathy were sent by the King and Queen and Princess Victoria to the bereaved relatives.  Harry is buried in Wolferton churchyard with his wife Sarah who died in 1943.

It has indeed been a fascinating journey, uncovering the life of Uncle Harry.  He was affectionately known as the “Mayor of Wolferton,” captained the cricket team, appeared in local am dram productions and, was in the territorial unit, some of which formed part of the fifth battalion Norfolk regiment The King’s Men which was the Lost Battalion at Gallipoli, Suvla Bay in 1915, some of whom would have departed from Wolferton station.

Harry’s life was truly an adventure.  My curiosity has led to another, for me.  My research has also provided the background for a recently published novel: The Royal Station Master’s Daughters, the first in a trilogy, by Ellee Seymour.

My great uncle was Harry Saward, brother of my father, Ernest.  I visited Wolferton Station when it was a museum and was amazed at the Station Master’s house where I think my mother stayed with her mother, Harry being her uncle, and had later photos when it was quite a ruin.

My mother and her parents enjoyed visiting her uncle Harry there when she was about three.  I wish I had asked them more about their time here, sadly mum (Beryl Saward) died when she was 49 and my teenage years had been taken up with schoolwork having gone through WW2 before that. Quite a bit of family history I have found too late in life (I’m just 88) although thankful for a reasonably good memory.