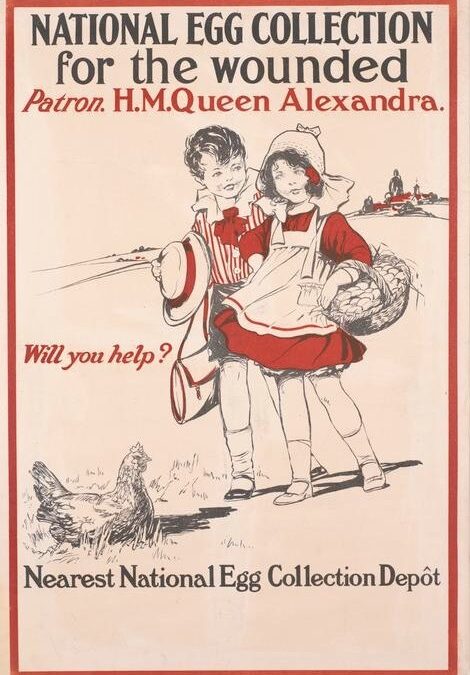 Did you know that more than 32 million eggs were dispatched overseas during WW1 to base hospitals in France and Belgium for the British wounded? The nutritional benefits of an egg were well recognised in WW1, as my research for The Royal Station Master’s Daughters led me to discover.

While delving into newspapers from 1915 I spotted a number of references to the National Egg Collection. Curious to learn more about it, I googled the words into my computer and could scarcely believe what I read – that 32 million eggs donated by British folk were transported to our Base hospitals in France and Belgium, with millions more going to hospitals in Britain for the wounded. These were fresh eggs, not boiled, and it was estimated that an egg could reach a wounded serviceman, even in France, within three days of being laid back in Blighty!

The National Egg Collection was launched in November 1914 following proposals put forward by the editor of Poultry World. The aim initially was to provide 20,000 newly-laid eggs a week to the wounded in hospital in Boulogne. However, very soon the organisation began to aim even higher, endeavouring to collect or purchase 200,000 eggs a week, a target that was reached at Easter 1915. In the following August, partly to celebrate the fact that Queen Alexandra had become the patron of the scheme, the War Office decided to see if the number could be increased to one million eggs a week. 1,030,380 eggs were received during the week 16-23 August, not including those sent directly to local hospitals.

Special boxes and labels were supplied (there were over 2,000 depots run by local groups and churches) and free transport was provided by the railways. A central collection point was established in London in a warehouse initially provided free of charge by Harrods.

I was thrilled to learn about this little known key fact about WW1 that had clearly engaged every town, city and village throughout the country, yet doesn’t get a mention in our history books that I have seen. Rest assured, it is mentioned in the pages of The Royal Station Master’s Daughters as I could imagine my royal station master, Harry Saward, and the tight knit community on the Sandringham estate, actively supporting this urgent appeal, dispatching eggs from this rural Norfolk station. Many of my stories are inspired by true events and my characters breathe life into them that I hope you will enjoy.

I’ve delved back into the newspaper archives again to tell you more about it:

Owing to the torpedoing of hospital ships thousands of wounded men cannot be brought home. In consequence the National Egg Collection, which has undertaken to supply all the eggs required for the wounded in France, must send at least 250,000 eggs weekly across the Channel. There is no substitute for eggs in maintaining a man’s vitality, hastening convalescence or even in preserving life. The eggs you send to the wounded man may make the difference between his turning the corner, or otherwise. help him back to health and strength.

About 250,000 fresh eggs, which are a vital necessity in cases of spinal wounds and gas poisoning, are sent every week to British base hospitals in France and each week a million are wanted.

Queen Alexandra made her own appeal in September 1917:

As Patron of the National Egg Collection for the Wounded I am rejoiced to hear that thirty-three-and-a-half million eggs have already been collected by the organisation and dispatched to our British wounded men lying in the Base Hospitals in France and our Home hospitals and I trust that no efforts will be spared by anyone connected with this organisation down to the youngest child collector, to continue the good work so untiringly and ungrudgingly carried out by them in the past.

Under Queen Alexandra’s words it was stated, “The wounded come first. No one who has the means to help can remain deaf to Her Majesty’s appeal. The need for more eggs is most urgent. No other food can take the place of eggs, and many a brave man owes his life or his recovery to them.”

This excellent report about the National Egg Collection by WW1 Centenary made me smile: “Donors were encouraged to write their name and address on the eggs with a message for the wounded (Poultry World called them ‘eggograms’) and often the grateful recipient of an egg would write to thank the sender. Such letters record the reception given to the arrival of fresh eggs in the hospitals. ‘I wish you could see the joy on the poor fellows’ faces when they get the eggs; it would fully repay you for all your trouble’ is a typical observation. Indeed, the morale-boosting aspect of the receipt of a fresh egg cannot be over-emphasised. It was estimated that an egg was placed in front of a wounded serviceman, even in France, within three days of being laid.”

Now isn’t that a story worth telling!