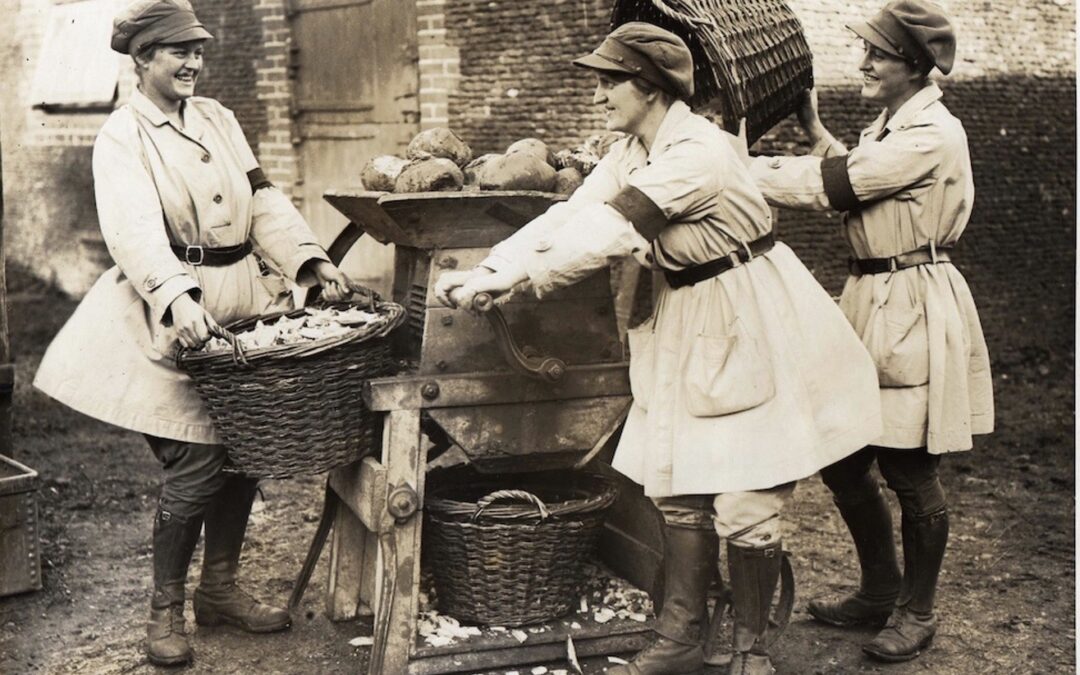 The second book in my series, The Station Master’s Daughters at War, features one my lead characters becoming a land army girl.

Most people associate land army girls with WW2. But did you know their origins go back to WW1? The Women’s Land Army was formed in 1917 in response to the German U-Boat blockade of Britain when our country faced food shortages, and there were few men available to work on the land as they had enlisted for the war.

However, even before then, Sandringham Estate were forerunners in taking on women farm workers. In 1916 sisters Hilda and Phylis Hobson and their cousin Marjorie Maxfield (pictured here) enlisted on the royal farm when the Women’s National Land Service was in existence. They minded the King’s award winning show cattle, as well as milking cows, chopping turnips, and much, much more, I’m sure.

Dressed in sturdy boots, corduroy breeches and linen coats, they were filmed at work for a newsreel that was shown in cinemas around the world and helped boost recruitment encouraging women to work on the land.

An article in Country Life, published November 1916, tells how well the trailblazing trio did, and impressed King George V:

They took up farm work about eight months ago as the form of patriotism they preferred and certainly at Sandringham their powers of endurance and hard work are thoroughly tested. Livestock make both early and late demands on attention. It is necessary to be up both times to feed them and the work continues until darkness.

The three ladies are keeping up the establishment to the very high standard with which it is associated. Houses and cattle alike are maintained in a state of perfect cleanliness and the King, on a recent visit to Sandringham, was very pleased with the results achieved by his feminine helpers.

Once these tough pioneering women had shown the naysayers they were not weaklings and could work with diligence and energy, there was no looking back, they were in great demand by farmers around the country. The Women’s Land Army was formed the following year.