How our government could help women find happiness 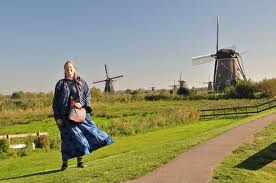 I have always considered the Netherlands a progressive nation, impressed at how multi-lingual its citizens are (I remember meeting one 11-year-old boy in Amsterdam who could speak four languages), and they have achieved impressive household recycling solutions we can only dream about here (including an ingenious kerbside collection of soiled disposable nappies for dissemination and re-use).

Now it seems they have also found the elusive solution about how to make women happy; what works for them is forget high flying career plans and work part-time. An eye-opening report by Helen Rumbelow in The Times stated that 75% of Dutch women work part-time – more than double than in the UK. The rate has also risen steadily, unlike most Western countries, including the UK, where women’s part-time work has falling in the past 30 years.

Incredibly, this includes Dutch women without children too who prefer to work a three or four-day week and spend free time with friends or at the gym. This makes them more than three times as likely to work part-time as a woman without kids in the UK.

Here in the UK women are defined by their work and actively encouraged to seek boardroom positions. But I wonder if it makes sense to threaten British companies of government sanction for failing to promote British women to the boardroom, and whether the same consideration should be given to providing more part-time professional jobs for women who don’t want to juggle the stresses of full-time work with having a young family. Is this included among questionsÂ  in the government’s survey on measuring happiness?

I also wonder what impact the Dutch women’s laid back lifestyle choice is having on their economy, though they don’t seem to care about this.Â  Rumbelow reports that in 2001 the Dutch government passed tax reforms in a desperate attempt to encourage women back into full-time work, but it had no effect. There is also a feminist backlash against them and the publication of a book called Spoilt Princesses which attacked women for opting out. Statistics show that the Netherlands ranks really low on women in top positions, somewhere near Pakistan. Rumbelow is stunned by all these findings too:

“”I started saying things I’m alarmed to hear come out of my mouth, such as: ‘It’s not all about happiness.’ What about a duty to shoulder the burden alongside your partner? A duty even to ensure women are represented in important decisions at every level? If I was a Dutch man, I’d get pretty narked that my girlfriend as at the gym on a Monday afternoon, paid for by my hard graft. Don’t men mind?

Ellen de Bruin, a psychologist and author of Dutch Women Don’t Get Depressed, replied: They haven’t rebelled. Our men are very kind and soft. A large proportion of Dutch women are economically dependent. That’s a personal risk to those women, but one they’ve chosen.”

It seems that women can have it all in the Netherlands: a man, a job, children and time off for themselves without being harshly judged and considered a “non person”.

Could the British culture embrace this ethos too?