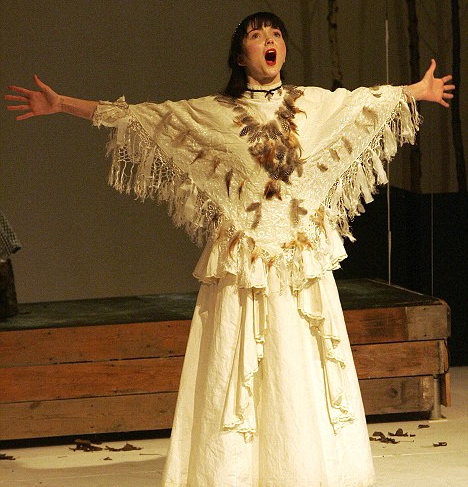 Modelling superstar Lily Cole strove to be just another Cambridge student as she made her acting debut at the city’s famous university ADC Theatre in Chekhov’s The Seagull.

Yet she knew that would be impossible as her fame would attract much attention, that all eyes would fall on her.

Yes, she was nervous and stilted at times in the first half, but she also had one particular memorable moment (the play within a play) and she was great in the second half, she was really very good. Who wouldn’t be nervous in her place? And yes, she did shake off those nerves.

I spoke to a few fellow theatre goers and none of them had a bad word to say about Lily’s performance.Â  One guy I spoke to in the bar afterwards who is in the film and TV business told me Lily could be proud of herself. And I agree. I hope she hasn’t read this report in the Daily Mail which cruelly savaged her. That’s no surprise as the Mail had previously reported how some disgruntled students felt she had been given the role unfairly due to limited stage experience – even though she has starred in films alongside Johnny Depp, Jude Law, Russell Brand and even the man of the moment himself, Colin Firth. I don’t believe a word of that story.

Lily is lucky to have beauty, brains and acting skills. She may not win an Oscar, but please, give her a break….