Honours, disappointments and a New Year 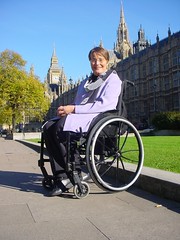 Congratulations to Labour MP Anne Begg who is to be made a dame in the New Year honour’s list. She has been rewarded for her services to th

e disabled and her work on equal opportunities; she was vice-chair of the rarely held Speaker’s Conference which made recommendations on promoting more disabled parliamentary candidates, as well as women MPs.

I have met Anne a couple of times and interviewed her last year for a project I was working on about women MPs when she told me about her very rare illness, Gauchers Disease, which is the reason she is confined to a wheelchair. It is a genetic disease caused by a defective enzyme which can lead to spleen and liver malfunction, skeleton disorders severe neurologic complication and distended abdomen, to name but a few symptoms. It sounds ghastly.

Despite this suffering,Â  Anne continues to work extremely long hours in one of the most stressful jobs possible which has little, if any, public appreciation, and puts in up to 80 hours a week. She also commutes to her constituency at weekends which is at the other side of the country in Aberdeen South. The stresses and strains which inevitably go with the job worsens her condition, yet she continues to soldier on without complaint. Despite our differing political colours, I have a strong admiration for Anne, and particularly for her steadfast work in promoting more women into parliament.

like to congratulate Conservative MP Peter Bottomley who is being knighted to reflect his “long and distinguished” career in Parliament, having first been elected to the Commons in 1975. His wife Virginia, also a former MP,Â  became a life peer in 2005.

Congratulations also to the wife of my husband’s cousin, Judith Borland, from Ely, who was awarded an MBE for her tireless support for the Soldiers, Sailors, Airmen and Families Association. Her husband John was a captain in the Army, and no doubt they will be celebrating well in his pub tonight.

Commiserations again to Bruce Forysyth, our much loved veteran TV entertainer, who has not been rewarded with a knighthood, despite a campaign launched earlier this year.Â  It’s ruffled Piers’ Morgan’s feathers who said on Twitter: “Utterly ridiculous that Bruce Forsyth still hasn’t been knighted.Â  What more must he do than be a multi-talented star for SEVEN decades?”

As we move into the New Year, we clearly face tough and challenging times ahead. At times like this it is important to retain your values, to continue to adapt and learn new skills and retain your self-belief. I hope I will continue to meet new and interesting people and learn something new as I have an insatiable appetite for knowledge, and more knowledge.

I don’t plan to make any New Year resolutions as during the last two years I have vowed to read more books and walk 20 miles effortlessly with the Ramblers, and neither have been achieved due to other commitments. But hey, maybe this year I can make them happen without even wishing for it….