Is there news of the Chandlers, kidnapped by Somalian pirates? 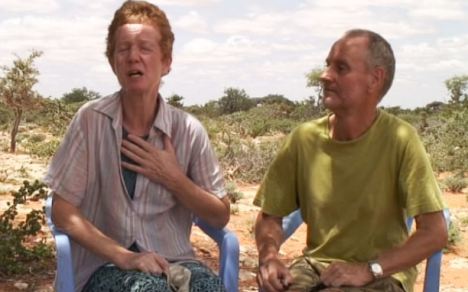 Next month will mark the first anniversary of the kidnap of British couple Paul and Rachel Chandler by ruthless Somalian pirates. Repeated ransom demands have been denied and negotiations have clearly stalled. The couple cannot comfort each other during their terrifying ordeal as they are separated to thwart rescue attempts.

Kidnappers hoped a change of government would be more sympathetic to their demands, but that was never going to happen. Meanwhile, these pirates continue to plunder the seas, and have just snatched a Greek chemical tanker with a crew of 18.

I’ve heard nothing about this couple for several months, and it’s now coming up to a year since they were snatched. I hope that determined efforts are being made to secure their release, that their plight is not being ignored.

The Times is right to highlight almost daily the story about the Iranian woman Sakineh Mohammadi Ashtiani who was barbarically sentenced to death by stoning. But why aren’t we doing more in our British press to demand the release of this couple who are caged up like animals in a lawless land and in fear for their lives?