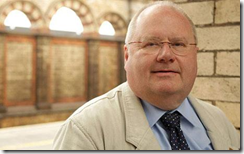 Gladstone, and with the heroic St George looking down on me, one of the stunning paintings which grace this unique place in history.

It was really hectic and there were lots of visitors and staff milling around. The busy reception staff, dressed formally in black tails, had called Eleanor Laing, Shadow Minister for Justice who I had arranged to meet, and I was waiting for her to arrive.

Suddenly, Eric Pickles walked by, and people seized their moment to grab his attention. First he was approached by a student who he listened to, and then congratulated for something or other. Then a middle-aged man I was standing next to limped over to Eric with the aid of two walking sticks, thrust a folded piece of paper into his hand and pleaded: â€œWill you please read this, itâ€™s my story and I would like you to read it.â€

Eric nodded and started to read it there and then, but the man told him he could do so later. Eric then shuffled off. Intrigued, I asked the man why he wanted to tell Eric his life story, and I am going to share his answer with you.

The manâ€™s name was Steve Nicholls and he is a haemophiliac. He suffers from a blood condition in which an essential clotting factor is either partly or completely missing, resulting in him to bleed for longer than normal, also resulting in internal bleeding into joints, muscles and soft tissues. Haemophilia is a lifelong inherited genetic condition.

Steveâ€™s tragic story was summarised in four paragraphs, describing how he was born with severe haemophilia which made him dependent on NHS blood. If that was not was bad enough, his life took an unwelcome turn for the worse after he was given contaminated blood and contracted Hepatitis C. He was in his 20s and felt crumpled and devastated, keeping his infection a secret because of the stigma attached to haemophilia.

His note describes how over 2,000 people, many of whom were his friends, have since lost their battle for life with HIV, Hepatitis C and VCJD, all blood born diseases/infections contracted, like him, through NHS administered blood transfusions. This mammoth catastrophe took place between the early 1970s and the mid 1980s and has since been described as the worst ever treatment disaster in the history of the NHS by fertility expert Lord Winston.

Steve, who is 42, has a wife and two kids to support and, thanks to a small grant from the Princeâ€™s Trust, gets by working as a washing machine engineer two days a week. He had lost his previous job in local government â€œout of fear for fellow workersâ€, and he was booted out of the tied accommodation that went with his job.

So our paths crossed in Westminster where I watched him trying to catch the attention of MPs who walked by so he could urge them to support the Contaminated Blood Bill which has its second reading in the House of Commons tomorrow; I wanted to help and was on the lookout for them too. The Bill is due to be heard at the end of the afternoon, certainly not the best day of the week and time of day, but I hope it somehow gets the attention it deserves.

It follows a  Private Membersâ€™ Bill drawn up by Lord Morris of Manchester, (whose niece is Estelle Morris) and who is president of the Haemophilia Society. He has championed their cause for justice. A two year  inquiry was held into the circumstances surrounding the contaminated blood disaster, which left 4,670 people with haemophilia infected with HIV and/or hepatitis C, of which almost 2,000 people have died as a result. It concluded that government procrastination led to thousands of patients becoming infected with HIV and Hepatitis C from contaminated blood, and that the infection of so many people was a "horrific human tragedy".

Lord Archer’s two-year privately funded inquiry was set up after decades of campaigning from victims and their families. His report noted: "The haemophilia community feels that their plight has never been fully acknowledged or addressed."

If 4,670 people had died or been injured in an air disaster, a rail crash, or as the result of flooding, would their families still be seeking justice more than 20 years later?

I hope Eric Pickles has had a chance to read Steveâ€™s story and will acknowledge his suffering. And the same goes for other MPs who Steve and his supporters bumped into or met, including Jeremy Hunt (he is Steveâ€™s local MP and he had a meeting with him), Anne Milton (she was keen to meet the campaigners), Dr Julian Lewis (he discussed this over lunch with one of Steveâ€™s supporters who was a constituent), Lembit Opik, Kate Hoey, and Charles Clarke. There is also an Early Day Motion seeking the support of MPs for the Contaminated Blood Bill.