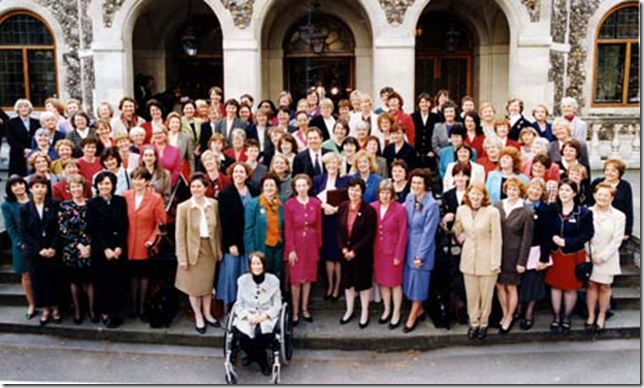 Iâ€™ve just been reading some latest figures about the number of women candidates selected for parliamentary seats which were presented to the Speakerâ€™s Conference.

This conference is convened by the Speaker of the House of Commons following an invitation from the Prime Minister, and  MPs from all political parties meet to consider issues within the electoral system.

In November 2008, a new conference committee was formed and asked to: "Consider, and make recommendations for rectifying, the disparity between the representation of women, ethnic minorities and disabled people in the House of  Commons and their representation in the UK population at large".

In many ways it seems that history is repeating itself as the first Speakerâ€™s conference back in 1916 paved the way for the enfranchisement of women in the UK. Yet getting women into parliament still remains a problem, it is still high on their agenda.

Gordon Brown, David Cameron and Nick Clegg all gave the Speakerâ€™s Conference their full support and pledged to do all they could to recruit PPCs from diverse background. They also complied with a request asking them to provide data showing the diversity of candidates who were selected by 12 October, and to make this information available in the future.

Most tellingly, although Labour is actively selecting women candidates with its all-womenâ€™s list which it introduced in 1997, it still struggles to get women selected in open selections. Evidence presented to the Speakerâ€™s Conference said that in the first 15 or 16 open selections, the Labour Party selected only one woman in a seat it held. It does not seem that real progress has been made.

The shortlists were meant to help foster a cultural change, but that does not seem to have happened, so all-women lists seem to be the only way of increasing the number of women MPs, which is why Conservatives need to do the same. And Lib Dems probably would if they could attract enough women candidates, a problem which they have admitted.

It is crucial that The House of Commons uses its newly elected MPs next year to modernise the way it works, and more women will  be needed to help with this momentous task as they will bring with their skills a different awareness and understanding about life today. We also need more MPs from black and minority backgrounds and the disabled as, in the words of the Speakerâ€™s Conference report, a parliament cannot be representative of its nation if it does not fully represent the diversity of peopleâ€™s lives.

Parliament today still remains predominantly white, male, middle-aged and middle class, and it is no wonder that large sections of the public cannot connect with it.

*And please, no references to those demeaning media terms, Blairâ€™s Babes and Cameronâ€™s Cuties.

Pic: Courtesy of The Guardian.