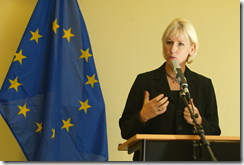 British politics, I was fascinated to read the results of a European-based survey on this topic – and discover unsurprisingly that similar attitudes are shared on the continent.

The survey of 35,000 women and 5,000 men in 27 countries revealed that politics is very much a male dominated world.

The European Parliament highlighted the issue to mark International Women’s Day on Sunday. Is worth noting that there are more female MEPs than MPs – 31.08 percent in the EP compared to 24.3

percent in the House of Commons. I know the very vibrant Vicky Ford is looking forward to increasing the female ratio in Brussels when she is elected in June for Conservatives.

The results of the latest Eurobarometer poll were presented at a seminar in the European Parliament yesterday.  MEP Mary Honeyball was there and and says the study showed that an astonishing 70 percent of women want 40 percent of MEPs to be female. So where are the female candidates?

Interestingly, the poll found that women are more concerned than men about the economic situation, risks of globalisation and its likely impact of the euro. Women also want the EP to push for time spent looking after children at home to be counted towards pension entitlements.

The European Commission’s most senior women, Vice-President Margot WallstrÃ¶m, a keen blogger, rightly pointed out that, “a democracy which does not make enough room for 52% of the population at the decision-making table is no real democracy at all.” I would love to meet Margot during my visit to Brussels later this month.

The poll found that a clear majority of men (77 %) agree that men dominate the political scene and that more women in politics could lead to a different style. In fact an overwhelming 83% of women and 76% of men agree that women can bring a different perspective to politics.

Most respondents want to see more women in politics, with up to half of the interviewees wishing to see at least 50% of MEPs being women, but only a minority, 10%, considering the use of mandatory quotas to be effective. Forty six percent felt their interests as women were not well represented in the EU.

In terms of how they decide to vote, two thirds of women gave importance to candidatesÂ´ experience on European issues rather than political orientation.

I would like to ask women readers what legislation they would like to see the EP introduce and whether they are concerned about lack of female representation in Brussels.