Would you run a marathon to provide water for your community? 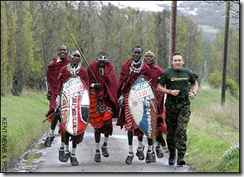 Would you run the London Marathon to provide water for your

village, like the Maasai warriors, who have flown thousands of miles here to do just that next weekend?

It is such a touching story that I would not be surprised if a generous philanthropist gets out his cheque book to meet the £60,000 bill.

But I’m sure that would not be the same for this proud tribe who are supporting the conservation charity Greenforce to get a clean water well installed in their village.

This is the first time the six Maasai warriors have left their remote village. It must be an incredible culture shock. Where they come from, two out of every three children in their village die before the age of five. It is an extraordinary story.

I saw them on Breakfast TV this morning when they showed us the two-year-old shoes they would be wearing made from car tyres, and said they would sing and dance their way along the route carrying their spears – unless the police prevent this as it would be carrying an offensive weapon!

It will probably be a piece of cake for them, they are used to running long distances, as Chief Isaya, 24, said:

"I sometimes run for two or three days when I am with my cattle, and I have to protect them from dangerous animals – like lions. I do not think the marathon will be difficult for us – our shoes are made of car tyres and they are very comfortable."

It’s a very humbling story, the fact that a community needs clean water so much that these selfless men travel a vast distance to a strange

country to run a marathon to promote their cause. It’s so ingenious and brave of them. It reminds me of Crocodile Dundee when Paul Hogan travels to New York after living in the Australian backwater and is a fish out of water.

I was very amused to read about how the Maasai’s have taken a liking to the British cuppa, filling their cups with 10 teaspoons of sugar per brew! As well as Cocoa Pops. They have already developed a very sweet tooth and I hope it won’t affect their performance on Sunday.

I also wonder if Nike or Adidas will give them some trainers to take home. Would they wear as well as their shoes made from car tyres?

And good luck to Tory Radio too who is also competing in the London Marathon, I hope he manages to get an interview with the warriors en route.