Who truly understands Kate McGann’s grief? Only another mother in the same position… 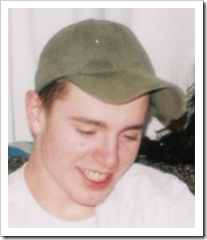 tragic disappearance of her beloved daughter Madeleine. The fact that she is to be officially declared a suspect by Portuguese police today is unimaginably cruel.

I do not know what evidence the police base their suspicions on, but it seems to me they want to take the easy way out, they have probably felt intensely impotent by their lack of success, the worldwide publicity which the McCann’s achieved – simply doing their utmost and pulling every string they could to lead them to Madeleine, but making enemies in the process. Will their devout prayers ever be answered?

Nicki Durbin knows only too well that prayers are not enough. She contacted me yesterday via facebook to discuss her son Luke’s mysterious disappearance. He vanished in May, 2006 after a night out in Ipswich aged 19. Astonishingly, she was offered bereavement counselling, an incredibly insensitve action when the family hope that he that he is still alive. She is hoping as many people as possible will sign up with Luke’s new facebook sites called Finding Luke and Find Luke Durbin to support their ongoing campaign.

She lives constantly with never ending uncertainty and raw pain, not knowing where to turn next, like so many others whose loved ones have vanished. Her message was very moving, and I have her permission to publish it here:

There has been no further news of Luke and as has been my state of mind for the last 16 months, I flit from surviving in the best way possible with ideas for publicity to regenerate Luke’s disappearance, to living in the depths of despair.

I decided to go back to my first idea re publicity, the Internet. Due to my complete ignorance of “social networking” and Facebook, with the help of one of Luke’s friends set up a group on here, then found out there were already another two running. However, decided the more, the more people it may reach. Thus, I wonder if you would mind joining and trying to get your contacts to join, so it circulates to other people.

I really do think it is so admirable how much you have helped families of the missing, it sadly seems so many of us run out of gusto and need to recharge again. To have someone so prominent advocating for our lost loved ones is a tremendous relief.

To add confusion to what I already find baffling in Facebook, I have Finding Luke as my name and the group is Find Luke. If you have a mo’ check on my profile and then the groups I have joined. I actually saw your name on the charity “Missing People” Facebook.

I am unsure what you know re the charity but they have a great guy leading the charity, Paul Tuohy and he is reshaking the charity so dramatically. As with all charities so much comes down to funding. I truly believe with Paul heading it, the families of the missing will eventually get full support and enlist professionals to enable us to learn about coping strategies we need to continue walking in this nightmare.

When I felt like insanity was beginning to creep into my world, my Family Liason Officer with the police suggested bereavement counselling. As I am sure you can imagine with no confirmation of Luke’s death it would have and still would seem perverse for me to go down that route.

I read the majority of your blogs on the missing, I often wonder how many people who have disappeared will end up being connected. Sadly, for the McCann family, they have brought the whole phenomena of the missing to the forefront of people’s minds. I wish there was a way to get across to people how indiscriminate it is, we were just a normal family, with ups and downs. I dread reading about another family who becomes a part of this “exclusive club”, I think I speak for so many parents when I say, the pain is so raw to us, our empathy goes above and beyond when we hear of another missing child, age regardless. I can only imagine it will be for the rest of our lives.

The Missing People facebook site can be found here.

Update: 8 September. This is unbelievable, Gerry McCann is made a named suspect too.