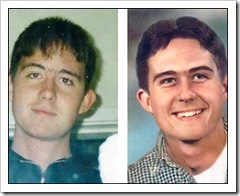 Damien Nettles went missing after a night out with friends on the Isle of Wight  in November, 1996 when he was just 16.

He had parted company from them at around 10.30pm. He was last seen at around midnight walking along the High Street in West Cowes shortly after buying chips. Damien was caught on CCTV footage talking to five or six men, only three have ever been identified.

Two were army officers who were in Cowes for training in sailing.  The other was a local drug dealer, who has since passed away, who was not identified until after his death.

“This is odd, as the Isle of Wight is a very small place and I am surprised that despite pictures and publicity of this video, it took over six years for someone to identify this individual.  The first two men were identified after a documentary, which aired in January 1997, 2 months after Damien went missing.  They were not local.  The National Missing Persons Charity was given an anonymous tip that
these two were from the Army, based in Aldershot.  They were interrogated and claim they did not know anything, however, both of them held conversation with Damien, as seen on the video. “

Last week, 21 June, was Damienâ€™s 27th birthday. The age progression picture shows him as he would look today.

Damien, who is 6ft 3ins, comes from a close family who miss him terribly. Sadly, his family has had to move to the USA for work since his disappearance but they are still hoping to hear news of Damien. His grandparents still live on the Isle of Wight.

Despite repeated appeals run by the charity Missing People over the years, including a widely circulated age progressed picture produced by the charity, there has been no news of Damien. His mother Val said:

â€œI miss his wonderful, silly sense of humour and how the room came alive when he entered itâ€¦. he was larger than life and teeming with mischief and fun.â€?

If anyone has any information about Damien please call the confidential 24 hour charity Missing People on Freefone 0500 700 700. Donations to the charity can be made via the website www.missingpeople.org.uk .Damienâ€™s family set up this website www.damiennettles.com