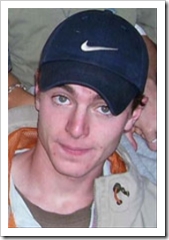 Luke Durbin is a local lad who went missing a year ago. His disappearance has

had considerable media and internet coverage thanks to an excellent campaign to keep his profile raised.

Luke, from Woodbridge in Suffolk, was 19 when he vanished in the early hours of 12 May, 2006 following a night out with friends at the Zest nightclub in Ipswich. His disappearance was totally out of character. He is described as a happy and sociable boy with a huge circle of friends.

I assume that a reported sighting of Luke last month in Taunton, Somerset drew a blank as there has been no further mention of it. Luke’s mother Nicki was unable to be optimistic until she knew the results of CCTV footage which was being examined.

â€œLast year I was shown CCTV footage of a man in Devon and I was convinced it was Luke. He had the same mannerisms and clothes so I asked police to keep re-running it. When it was enhanced though I realised it wasn’t him.

â€œAs soon as I heard this sighting was in Taunton, I thought it must be the same man as last year. My hopes have been raised so many times that I’m trying to stay incredibly grounded. I just want it to be Luke.â€?