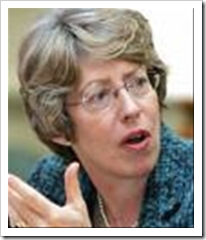 On 30 June 2006, the Health Secretary Patricia Hewitt wrote a letter to The

Times and The Guardian stating:

“This Government is committed to a publicly-funded health service that is free at the point of use and available to all, regardless of means.”

If that is the case, then why is Norfolk Primary Care Trust refusing to fund medication that could prevent old folk from going blind?  What justification can there be?

Twenty thousand people in England and Wales could lose their sight this year because they are denied these desperately needed drugs not available on the NHS.

The Eastern Daily Press has highlighted four heartbreaking cases this week of pensioners going blind, being forced to pay privately for injections to slow the progress of age-related macular degeneration, the most common cause of blindness in the UK, including 84-year-old Sheila Pearl who said poignantly:

“You are faced with a very clear choice – either cough up, if indeed you are able to, or go blind. Or I suppose I could solve the problem by popping off.”

And 96-year-old Philip Hemmings has so far spent Â£4,000 savings on the medication:

“I’m not yet sure how long I can afford it, but when the money is gone, it’s gone.”

Cross-party MPs in Norfolk have taken up their plight, including sacked Home Secretary Charles Clarke, who agrees:

“There’s a massive issue here about all NHS resources and what is and isn’t funded. I’m very sympathetic to their case.”

I felt total despair when I read this, and total disbelief that our older generation should be allowed to suffer in such a cruel way.

Sympathy is not enough, these vulnerable people desperately need the medication they are entitled to so they can retain some quality of life in their winter years. What kind of heartless government denies it? The cost of treatment is Â£1,800 for up to three injections into the eyeball, a pittance compared to the cost of long-term care if they go blind.

How is Patricia Hewitt allowed to stay in office when she has so clearly failed to keep her word about providing a publicly-funded heath service that is “free and available to all”? Perhaps she should try walking around with a blindfold and white stick to find out what it feels like for these helpless pensioners, to empathise with their agony.