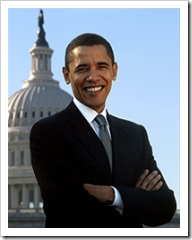 presidential election. Could he be their first black president?

Obama, 45, has had an astounding and meteoric rise in politics, having spent only two years in the Senate. He is now travelling around the country and listening to people and will announce his decision in three weeks. This news has “sent a jolt of electricity through a field that is likely to include New York Sen. Hillary Rodham Clinton”.

Unlike Mrs Clinton who voted for the Iraq war, Obama opposed it from the outset. He is said to be hugely charismatic and is hoping that his inexperience and freshness will work in his favour. It is also thought that his colour – his mother was white, his father a black Kenyan â€” will attract African-Americans votes.

But he wouldn’t have got this far without any talent. His website reports that he has dedicated his life to public service as a community organizer, civil rights attorney and leader in the Illinois state Senate, that Obama now continues his fight for working families.

He is a strong contender, currently running second to Hillary Clinton for the Democratic nomination. What do you think his chances are?