The Chandlers are freed by Somalian pirates 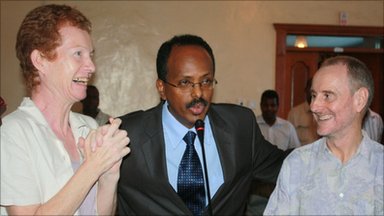 What a breathtaking weekend for releases from captivity. First, the Burmese demure pro-democracy leader

Aung San Suu Kyi was freed yesterday by her country’s dictators after spending more than 15 years under house arrest.

And now British couple Paul and Rachel Chandler have been released by Somalian pirates after spending over a year in captivity. I thought everyone had forgotten about this couple and I am delighted to learn they are now safe and out of danger in Kenya. The Daily Mail reports that a $1 million ransom was paid.Â  The Guardian writes that the Chandlers’ family handed over Â£350,000 several months ago, but that it fell in the wrong hands. A second successful payment was made for the same amount, and this was paid into a different country.Â  Can you blame them for paying? I don’t. Of course, you want to save the lives of your loved ones.

The meida held off reporting the release due to an injunction as the Chandlers’ family wanted to stop news organisations covering their release until they were safely out of Somalia. I suspect we will learn details about their freedom very soon.

There was much concern from readers of my blog that this couple’s fate had been forgotten about as there was no updated public news or information about their well being. So this is indeed terrific news, and I am so delighted for the Chandlers and their families who have experienced the most terrible ordeal. The couple look thin, but jubilant, as one would expect.

The couple were told they were to be released two days ago.

“We were told on Friday in a way which gave us some confidence to believe it. Otherwise we’d been told we’d be released in 10 days almost every 10 days for the past nine months. So we’d taken all these suggestions with a pinch of salt.”

Asked if he had felt their lives had been in danger during captivity, he said: “That’s something we’ll talk about later, but we were not really directly endangered by the gang, after the initial seizure.”

And he is keen to get back to sea soon. As far away as possible from Somalia, I hope.

Just to remind you what a terrifying ordeal this couple experienced, this video was made by the pirates and show the Chandlers pleading for a ransom to be paid.