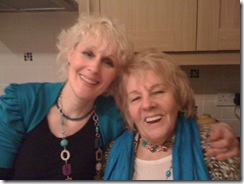 Ever since my mother-in-law died last month, my mother Loula has been anxious to visit the country of her birth, Greece. She particularly wanted to stay in a favourite hotel in Rhodes where she had spent many happy holidays with my late father.

Unfortunately, it was not possible to arrange because the flights from Gatwick were either too early or too late. So my sister Rosalind put plan B into operation â€“ a weeks cruise around the Greek islands flying from Norwich Airport to Corfu in the middle of the afternoon. It seemed perfect.

They should have arrived by now and been relaxing in the deluxe cabin my sister booked. Instead, they are stranded in a hotel in Italy after treacherous weather conditions made it impossible for the plane to land in Greece.

Their problems started when the flight was delayed three hours. Then a knife my mother and sister had with their hand luggage to cut up some apples was, of course, confiscated. I had warned them about the limits on fluids they could take through security, but it never occurred to me that they would take a kitchen knife with them for their packed lunch. My motherâ€™s request to collect it on her return journey was denied!

Then her black ankle strap sandals set off the security alarm; they are more rock chick or punky than anything sensible like Dr Scholls. â€œDare you wear them?â€ she asked me defiantly last weekend.

After finally making it to the plane, they were warned about horrendous storms in Corfu, said to have the shortest runway in the world, and the flight was diverted to Italy where they spent half the night sitting on the tarmac watching the Mediterranean rain pour down and waiting for someone to make a decision.

In the small hours of the morning they were transferred to a hotel opened specially for them where they still remain.

â€œIâ€™m just popping down to security to ask them where we are,â€ said my very patient sister, who has persuaded my mother that this is quite an adventure. Iâ€™m waiting for her to tell me their location, but I get the feeling itâ€™s irrelevant anyway.

Mum is happy to have found a flirtatious Greek traveller and they have bonded and been singing many of her favourite songs; she does have a terrific voice.

The latest plan is that they fly to Heraklion in Crete this evening and spend the night in a hotel before joining their cruise ship tomorrow. Itâ€™s a shame that their time on the ship has been cut by at least two nights as this was meant to be a very special trip for mum.

It certainly will be a memorable one. But I wonder what the odds are of me arriving in Manchester first tomorrow evening for the Conservative conference before they set foot on their shipâ€¦