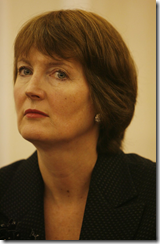 At a time when more women should be encouraged to become parliamentary candidates, I fear they may be even more deterred by the severe economic downturn.

Contesting a parliamentary seat is an exhausting task and financially crippling. The immensely dedicated Robert Halfon describes in this article the soaring costs involved which candidates have to meet; he told how he had spent Â£30,000 in his fight for Harlow – and that was up until December 2005. That figure has probably topped Â£40,000 now and will continue to soar until the election is held. These kind of figures are not encouraging for women who are often first in line for redundancy.

of women in Parliament. That is a very sad figure in this day and age of women’s equality.

The Commission is monitoring the annual index of women in positions of authority and influence in Britain and believes  that the emerging trend is one of reversal or stalled progress, with a few exceptions in the arts and voluntary sectors.

It mentions how only 19.3% of our MPs are presently women, and says a snail could crawl the entire length of the Great Wall of China in 212 years, just slightly longer than the 200 years it will take for women to be equally represented in Parliament. I love data, and these figures certainly focus the mind on what seems insurmountable!

This is an area which Labour’s deputy leader Harriet Harman should be taking a lead on as Minister for Women and Equality. I find it shocking that the United Kingdom lags so far behind other countries in being represented by women politicians. In fact, the UK currently ranks 70th and is outperformed by Rwanda, Afghanistan and Iraq in terms of womenâ€™s representation.

Are British women simply not interested in taking a pivotal role in political life, or are they deterred by the selection process, financial costs and gruelling campaigning which it entails? Will it always be “jobs for the boys” in Westminster village?