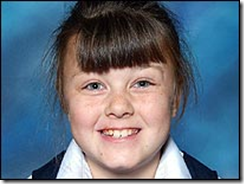 I imagine the whole nation is feeling overwhelming relief

following the brilliant news that nine-year-old schoolgirl Shannon Matthews has been found alive and well, three weeks after going missing.

She had been found concealed in the base of a divan bed in a house in Dewsbury and a 39-year-old man has been arrested on suspicion of abduction.

This is particularly great news following the first ever march in London for families of missing people earlier this week. They said they would only feel joy if any of them were reunited with their lost loved one, they would share their happiness with them, despite their personal ongoing heartache.

It will also put an end to the cruel media speculation which the Matthews and McCann families have endured, the comparisons made between coverage of Shannon and Madeleine McCann‘s disappearances based on their different backgrounds.

Let’s hope more families with missing loved ones have good news to look forward to soon as well.