Hoping David will get the all clear today 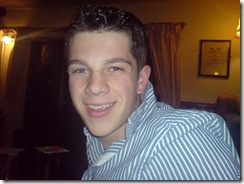 David and I are heading for Great Ormond Street Hospital again today and I am confident he will finally be discharged following a very painful four years of suffering from chronic osteomyelitis.

David’s difficulty was that he was not a text book case and it proved baffling for the medical profession. Since coming off his medication over the last couple of months, the pain and swelling in his jawbone has mercifully not returned. This is a great turning point.

When David tried this around Easter, he was in agony and had to instantly resume the antibiotics. A bone scan later showed a hot spot area where the infection was still active. But his recent biopsy was negative and he has also been seen by a consultant for infectious diseases at GOS. I am confident thatÂ  his maxillofacial consultant, Peter Ayliffe, will give him a clean bill of health today. A thousand thanks to everyone at GOS who cared for David. We hope to make the most of our trip to London and catch up with some Christmas shopping afterwards, I might take him to Harrods as he has never been – even if it is just window shopping.

I send my warm wishes to Jude, whose daughter Bronwyn is suffering from the same infection, and left a comment on one of my previous posts stating:

I just thought I would introduce myself as my daughter who is 14 has just been diagnosed with the same as your son, we live in North Lincs but are under Childrens in Sheffield it has taken 14 months to get this diagnosis and we are lucky that I have kept pushing to get it and the consultant she eventualy saw specialises in this disease. We are off on Tuesday this week to see him her first appoiontment with him so hope we can find a lot more out about it and what her future holds as life has been very bad for her for the last year in constant pain with no real relief!

just thougth it might be nice to chat to some one who has and is still going through the problems I am.

Went to our consultant and he was running an hour and half late so was not very good appiontment, she is going back to the pain clinic to have her tablets altered and see if that helps, Bronwyn is not in a good place at the moment she is having a lot of pain and not much sleep on about 3 hours a night so is very sleepy and grumpy with it had to take her to our doctors today as she has got another infection in her toe so on anti biotics again now the weather is starting to change will find it harder to get her out as the cold seems to affect her.

Brownyn has to be home tutoured at the moment so again this makes her life hard to keep in touch with her friends other than on a computer on text. I try to keep positive but it is hard at times, going to start part time work in 2 weeks to see if I can try and get her in a more stable place.

And warm wishes to Paula too:

I have been reading all about your son.I can relate as we have a daughter that is 11 and for the last 7 years has had osteomyelitis of her jaw bone.She has had 5 surgerys and has been on a rediculous amount of drugs.We deal with an oral surgeon.

I shall be thinking of Jude and Paula today, and hoping that their children will soon make a similar good recovery. I know what they are going through, and how as a parent, they feel the pain for their child. I know the helplessness they experience and the trust that they place in the medical profession.

My message to them, and others in the same situation, is please do not be afraid to seek a second opinion. I can’t praise GOS highly enough and suggest you ask for a referral there if all other options seem to be failing, it will be worth the inconvenience of a long journey. That is what I was forced to do when we were getting nowhere with David’s previous consultant in Cambridge. It was the best decision I ever made.

UPDATE 7.30pm: They are so thorough at GOS. Despite our good news, David had an X-ray which showed no abnormalities, but his consultant still wants to keep him under his care for another year in case David has a relapse. He will discharge David when he has been pain-free for a year. They are absolutely brilliant.

We naturally had a celebratory lunch and David enjoyed his visit to Harrods and was gobsmacked at some of the prices – he picked up a box of chocolates for a friend which cost Â£65. I restocked on some of my favourite face creams.