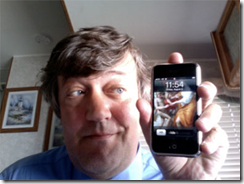 something of a geek. Let’s hope he shares some gossipy tit bits about his theatrical life, as well as describing how he copes with depression.

I find Stephen Fry a totally fascinating man, I would love to have dinner with him, to fall under the spell of his hypnotic voice.

I walked by a restaurant in Burnham Market last year and saw him dining with friends. He looked so magnificent, they were enthralled by his every word, and I was rooted to the spot watching his body language, the way he was so entertaining and being admired.

His first post had the content of a double page newspaper spread. I hope this will be followed by some short and sweet literary revelations.