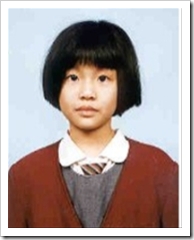 Despite the fact that my blog is banned in China, I would like to highlight the mysterious disappearance of a young Chinese girl, Leung Wan-wah. She vanished in August 1998 at the age of nine. A substantial reward of $100,000 was offered for information.

Leung Wan-wah went to play at a friend’s house in Mongkok and she later left to visit another friend, but never arrived at her house, and has not been seen since.

Despite extensive enquiries, the reason for her disappearance is not known. Police suspect that something “untoward” may have happened to her.