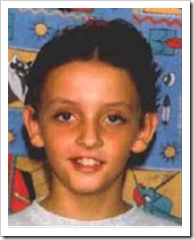 Every day from today, I am going to write a post about a missing person. I am

doing it to remind us that this is a terrifying nightmare that happens to some families. How they continue their tormented lives, I cannot imagine, it must be a living hell.

I am doing it because of a comment posted by Tom Paine in my recent post about Madeleine, four today. He questioned whether the intense media attention about her disappearance was because she was blonde, and asked if similar coverage was given to missing boys.

He may well be right. So I am doing my little bit to remind everyone about the missing people in our world who have simply vanished without trace, perhaps in the clutches of evil people, their fate unknown. This is the cruellest agony for families to endure.

I shall start today with a Portuguese boy following reports about how Portuguese families are distraught about their lost children.

Rui Pedro Mendonca vanished in 1998, when he was 11 while walking home from school in the northern Portuguese town Lousada. A month later, hopes were raised when he was sighted with a middle-aged man in Disneyland in Paris. Then three years later, his motherâ€™s worst fears were realised. Horrific images of Rui Pedro being sexually abused were reportedly uncovered during an international police operation that cracked a global paedophile network. More than 200 paedophiles in 13 countries had exchanged more than 750,000 images of children through a private internet club called Wonderland.

Rui Pedro has never been found, the trail has gone cold and investigators fear that may have been murdered to cover up the abuse.

Update 30 Aug, 2007: Although this post is now ocassional, I am still very dedicated to the cause and will continue to write these reports whenever possible. My heart is with families who have lost love ones without any real explanation, they have simply vanished.