Do you also think this is a rubbish idea? 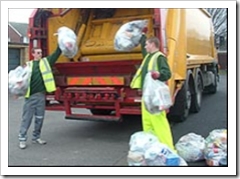 One subject certain to arouse anger among householders is the fortnightly

rubbish collection and fears over the vermin it attracts. Local newspapers have filled their letters and news pages several times over on this topic.

Yet in spite of these very real concerns, government seems to be in favour of ending the weekly bin collection, saying there would be no hygiene problems if rubbish was properly wrapped.

But according to this report, Labour was warned by its own scientists that abolishing weekly rubbish collections DID increase the threat of infestation by rats, insects and other vermin. Isn’t this threat likely to increase with hotter summers and global warming?

The damning report was produced by scientists inside the Department for Environment, Food and Rural Affairs last January. It states:

“There are significant gaps in knowledge to fully understand the implications of changes to collection routines. Providing alternate weekly collection to facilitate recycling schemes could result in accumulation of waste at households.

“This could encourage vermin and insects into the home environment, which could potentially increase disease transmission routes.”

So why has this advice been ignored? And surely householders already know about wrapping up leaking or smelly waste before throwing it out, they would be doing their utmost to prevent rats appearing on their doorstep.

I totally support a fortnightly collection of recyclables, but why not also maintain the weekly collection of residual household waste? Householders will be forced to reduce the amount collected anyway with pay-as-you-throw schemes being introduced.

The government and local authorities are choosing the cheapest and easy way out. I just don’t see any sense in it. Good luck to Doretta Cox and her Campaign for Weekly Waste Collection. Still, if this new quango takes over responsibility for rubbish collection, it’s unlikely their voice, or anyone else’s, will be heard.

Where I live in East Cambridgeshire, our rubbish is still collected each week, and I want it to stay that way, but neighbouring authorities have introduced fortnightly collections and I have not met anybody who thinks it is a good idea. Has it worked where you are? What are your views about fortnightly rubbish collections?