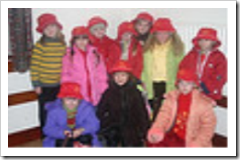 A Chernobyl charity’s plea to Gordon Brown to waive airport taxes for bringing sick children to the UK for recuperative breaks has fallen on deaf ears. The Chancellor has refused to exempt it on humanitarian grounds.

The adorable looking girls in this picture aged seven and eight are currently visiting my area, thanks to the East Cambs branch of Chernobyl Children Life Line.  They would not be here if it had not been for the catastrophic Chernobyl accident 21 years ago, the world’s worst nuclear power disaster. As a result, all the youngsters suffer from immune system defects and many have had forms of cancer related to the radioactivity.

They have been robbed of a normal, healthy life. The ground where they live will be contaminated for thousands of years. According to the charity, they drink contaminated water and eat food grown in contaminated soil. Only 5% of the children are left healthy. There is an alarming increase in bone marrow and brain tumours amongst children, with more of them suffering from malignant tumours of the mammary glands, lungs, bladder and kidneys.

During their respite break, the youngsters will have free eye tests and be provided with glasses if necessary, local facilities have been provided free of charge or at a reduced rate, including a game of ten pin bowling, and they will eat healthy food free from contamination. The aim is to improve their immune system and improve their health. Free dental treatment is also provided. It is a once in a lifetime holiday for these youngsters.

The charity pays the children’s Â£260 air fare from Minsk to Gatwick, plus Â£40 airport tax. It has written to Gordon Brown asking if the tax could be waived, but the request was refused. The East Cambs branch arranges two trips a year for between 10 and 12 children, resulting in a hefty Â£800 – Â£980. They have to raise Â£7,000 a year.

Mark Shelton brought this to my attention, his family is hosting a child for the third year, he cannot understand why charities are not exempt from airport taxes on humanitarian grounds.

“When children are being brought from an area that was contaminated with radioactivity through no fault of theirs to the UK for respite care in a clean environment, and it is all being paid for by charitable donations, I do think that the tax could be waived for humanitarian reasons. I am sure that Chernobyl Children Life Line is not the only charity that has been affected by the this tax.

“I feel that the Chancellor should show willing and waive the airport tax for these children to allow them to get respite care in the UK. I am in favour of the tax to cut pollution (and my green side says that the tax is not high enough!), but these children come from very poor families, most of whom don’t own cars and this may well be their only flight in a life time, so compared to western children they will not be causing any great pollution in their lifetimes. I don’t know whether rescue workers flying out to disaster areas or Medicine Sans Frontier for example have to pay the airport tax, but I think for humanitarian reasons, such charities should be exempt paying the airport tax so that money raised through fund raising events can be spent on the good cause in question.”

Is there any way that charities can get around paying this tax? Mark states an excellent case, so why can’t the Chancellor show a human face and make them exempt, do you also support Mark’s views?