Bloggers help to win votes for the American presidential campaign 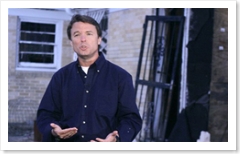 It may be almost two years until the American presidential election, but I am already riveted by it, particularly the high profile given to bloggers and the impact the social media will have on this exciting campaign.

Wasn’t it slick of John Edwards to announce his candidacy in New Orleans, still devastated by last year’s Hurricane Katrina (which Bush failed on big time), with an anti-poverty message. I felt it was the kind of move that David Cameron would have made to win over voters who have been let down badly by government.

The Democrat hopeful was interviewed by bloggers, including Jake Ludington who recorded it on video and says:

“Other candidates on both sides of the aisle need to take note and recognize that this is the kind of grass roots communication we need from potential leaders of the country.”

And one of America’s top bloggers, Robert Scoble, who I met at a girls’ geeks get together in London earlier this month, was invited to join Edwards for his announcement and cover it as a journalist for his podtech show. I imagine Edwards will certainly want to keep him on board. Scoble sums up how Washington Post political journalist Dan Baltz predicts the campaign will run:

“Technology is radically changing campaigns, he says. First heâ€™s no longer writing just for paper. Dan told me heâ€™s updated his story several times in the past few hours, plus heâ€™s been on radio and TV interviews. The Post wants him to produce podcasts and video blogs too, or look for opportunities in bringing other media onto the Postâ€™s pages.

“Heâ€™s typing furiously into a Dell laptop â€” is now rewriting his article for the newspaper that everyone will get in the morning â€” and has a Verizon Wireless card.

“The world of politics is changing, he told me, because now a candidate must give dozens of interviews to tons of different people with small audiences. The age of talking to one guy who had a massive audience is probably over. Even if you leave blogs out of the story even the mainstream press is seeing its audiences split up into smaller and smaller niches with more and more pieces. I remember back to journalism school where I saw pictures of the Presidential press corps back in the 1960s: there were only a handful of journalists. Today, even for news like today, dozens of different camera crews show up, along with dozens more of print journalists, photographers, everyday citizens, and radio journalists.

“One other thing that we chatted about is business models. He knows his organization is under pressure to not only grow audience (he says the Washington Post is read now more than ever, but increasingly only online) but also figure out how to make money with its increasingly online audience. Heâ€™s not the only journalist to talk with me about that lately â€” seems the entire industry is focused on how to make money to continue to fund content.”

This is fascinating because it highlights the difficulties faced by the traditional press to inform their readers and embrace social media too, what happens in the States will surely follow here in due course. Although our mainstream media has already taken blogs and podcasts on board, they will need to decide how to take it one or two steps further. No doubt they will be watching the American experience with great interest, as will our politicians. Do you think politicians need bloggers to get over their message too? Do you believe they are more credible than journalists?

I’m convinced that voters will want to read the more personal insights about politicians from blogs as newspapers tend to give pretty much the same report, that they will break exciting stories too, that the essential grassroots stuff will come from people like you and me who are assiduously reading and writing our posts.