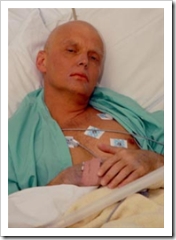 critics Alexander Litvinenko, trying to murder him with radioactive toxins. As a tribute to Alexander I have posted snapshots of Mother Russia on the top of my weblog, a country I visited once and am fascinated by.

My post about the former agent earlier this week attracted interesting comments from two bloggers based in the Russian Federation, nourishing obscurity and nfb, who both felt it

did not reflect the true way of life in Russia today. James, of n.o., believes that living standards have improved and that it’s the “Russian way” to bump off critics, while nfb says  “it is silly to think the CIA and MI5 don’t get their hands dirty”, then adds “use your heads – donâ€™t read newspapers and watch TV”.

nfb, I love reading papers and learning about your country, the good and bad, but why is it taking a backward step and denying free speech, why is Putin so afraid of his critics?

What happened to Vladimir Rakhmankov following his trial for satarising Putin?  I understand he faces a year’s hard labour for insulting a representative of the state. This followed Putin’s suggestion that women should have more children and Rakhmankov responded with his satirical article calling Putin “the nation’s phallic symbol”.  Isn’t that a bit harsh? It was only a joke. Will Mother Russia ever embrace free speech, shrug off its past repression?

Russian journalist Deliya Melyanova sums up the issue pretty well by describing the Russian culture, its fear of speaking out and rocking the boat.

“It is admittedly clear that Russians are happy with what Putin has done. Living standards have at least stabilised. Russian foreign policy has become more assertive. The war in Chechnya has been officially concluded. But it is also true that the media has come under such control that Putinâ€™s image is not subject to any disturbing impacts.

“One gets the impression in Russia of a country anxious to stop itself â€œfalling apartâ€?. There is a feeling that it is on the edge of chaos, held together only by the â€œstrengthâ€? of the central government. Russians are therefore afraid of self-determination and, as it were, a multivocal society, afraid of freedom, associating it with weakness and disintegration.”

This Washington Post article gives an interesting insight into how Putin’s hand picked press team works, I don’t think he’s the only leader who has planted a few questions in the audience, it’s common practice.

“The Kremlin press pool is like so many institutions in Russia that have the trappings of a Western-style pluralistic society but operate under a different set of understandings, part of what analyst Lilia Shevtsova of the Carnegie Moscow Center calls “the illusion of democracy.” Television channels air newscasts with fancy graphics but follow scripts approved by the Kremlin. Elections are held, but candidates out of favor with the Kremlin are often knocked off the ballot. Courts conduct trials, but the state almost never loses. Parliament meets but only to rubber-stamp Kremlin legislation.”

But Putin knows he can’t silence all  his critics, he will continue to be challenged about freedom of speech, they will continue to bravely demonstrate and demand that “you can’t kill the truth”. Not even by the use of radioactive poisons.