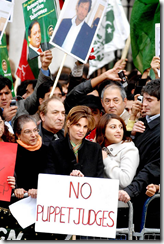 Jemima Khan has gone up tremendously

in my estimation following her very public support for her former husband Imran, as well as other political activists, following their arrest in Pakistan.

Jemima has become a lead spokesman in the UK fighting his cause, and other opponents jailed in the run up to January’s elections.

We are now seeing a different Jemima from the socialite often pictured in the tabloids following her divorce. She has launched a Free Pakistan Movement which will hold protest marches on a daily basis in London and other parts of UK against what she calls “General Pervez Musharraf’s second martial law”.

Let’s not also forget that Jemima, a mother of two, already has campaiging experience under her belt, that she has been a UNICEF ambassador since 2001 and and has been passionately campaigning for children and their right to grow up in a world where they can be healthy, educated and free from conflict. One would imagine that she is extremely well connected, that influential people around the world will listen to her voice. She knows she cannot stay silent.

Jemima’s regular news updates are ensuring that the plight of those arrested will not be forgotten. Her account in today’s Sunday Telegraph is gripping; how must it feel for a mother to tell her two young sons that their father has been charged with ‘state terrorism’ and that if convicted, he faces the death penalty or life imprisonment?

When the General first came to power (by a military coup), I was taken in by his declared intention to clean up Pakistani politics and to hold corrupt politicians accountable. These are the same politicians he is now trying to do deals with. Two successive prime ministers had been dismissed on corruption charges (twice each) and everyone living there at that time was fed up.

Regrettably, Imran and I even supported Musharraf’s ridiculous heads-I-win-tails-you-lose referendum devised to give him a pseudo-mandate to stay in power.

I remember I was summoned to meet him a week before the elections, last month, to convey a message to Imran who was away campaigning in his constituency. I was asked to arrive after midnight and was sneaked into his residence after being searched for recording devices. The self-appointed president outlined the results of the impending elections, reeling off the exact number of seats the various parties would win.

It turned out he was spot on, and not, I suspect, because of any great political foresight. Musharraf also guaranteed Imran’s fledgling party a significant number of seats and a ministry of his choice if he joined forces with his coalition of government-friendly parties. Imran refused. He had already become disillusioned by Musharraf.