Will only quotas increase women MPs? 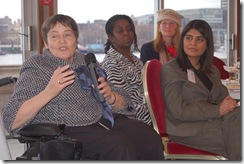 I know there is all party support for more women MPs, the problem is getting women candidates selected by associations in winnable seats. But is it just lip service?

Of course women want to be stand alongside men and be chosen on merit, but it doesn’t necessarily work that way, which is why there are currently 126 women in the House of Commons compared to 519 men, and 15 MPs from ethnic minorities: it would have been considerably less without the 1997 influx of Labour women from all women shortlists, which Conservatives might also introduce to narrow the gap.

This is why I support recommendations from the Speaker’s Conference which warns that quotas of women parliamentary candidates could be made mandatory unless there is a significant number of women MPs at the next election.

And, also controversially, the Speaker’s Conference called for the law to be changed to allow parties to exclude white candidates when drawing up shortlists to increase BME representation. This is a brave move too, though harder for me to support as they do not represent the same large proportion of society as women.

As I have said before, parliament is not representative of the electorate, the majority of MPs are white, middle class men. We need MPs from different backgrounds and experiences with different perspectives which will strengthen the way we are governed.

I am meeting Anne Begg (pic) this week, vice-chairman of the Speaker’s Conference, who firmly believes the case for equality of representation has not yet been won. I look forward to discussing this with her. Anne, who is wheelchair bound, constantly faces the immense challenges of disability, of ‘being invisible’. I shall also be meeting Theresa May, Shadow Minister for Women, and Jo Swinson, a Lib Dem member of the Speaker’s Conference.

The Speaker’s Conference has facilitated considerable electoral reforms. The first conference was held between 1916-18 and resulted in votes for women, and the conference held in 1965 led to votes at 18.

I do hope that associations take note and select competent women candidates in winnable seats and BME candidates too.  I just hope they will not be regarded as second rate MPs because of this; all new MPs need to be supported, not denigrated.