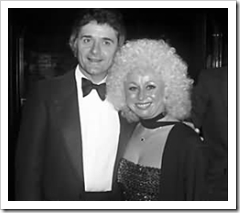 I wonder how many pensioners have knocked on their new neighbour’s door to borrow a cup of sugar.

Ronnie Knight, now 73, the former East End gangster once married to Barbara Windsor, has moved into a very modest one-bed pensioners’ housing block in Cambridge where he pays Â£360 a month rent.

He has chatted with fellow pensioners about his life of crime and marriage to Babs, who provided furniture for his flat when he moved in.

His high life now includes a choice of bingo, coffee mornings, shopping trips to Tesco, a game of dominoes, trips to Newmarket races and afternoon cream teas. A far cry from the showbiz parties he once frequented, though he is said to keep himself to himself.

He hit hard times a few years ago when he was caught shoplifting, tame stuff compared to the former crimes of the once flamboyant villain who lived the high life on the “Costa del Crime” for 10 years on part of the proceeds of a Â£6 million robbery.

I’ve got no idea why he ended up in Cambridge, but he is in good company, among the great and the good and some of the cleverest brains in the world.