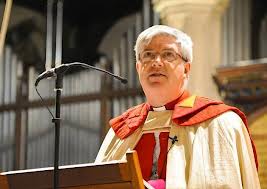 This is a guest post by former chaplain and anti-sex trafficking campaigner Dr Carrie Pemberton Ford, diversities and equalities consultant, theologian and human rights advocate, ordained priest and Â director of CCARHT a research centre on human trafficking in the UK.

Just when we thought that the Church of England had made its final assault on civil society’s sense of modernity and inclusion by failing to support women bishops, here comes another twist which is beyond belief.

The latest House of Bishops announcement effectively ends the ban on an openly gay man becoming bishop – as long as he remains celibate, and repents of any gay sexual relationships which he might have engaged in before his appointment. This interrogation on sexual practice does not form part of the standard procedures for appointment for a ‘straight’ male bishop, and, as the Christian writer Symon Hill, also the associate director of the think-tank Ekklesia, noted in an interview with The Independent this week, Â the Church of England is still in the position of enforcing discrimination against both homosexual and female clergy.

“Unfortunately this is being presented as progress,â€ he said, â€but it’s really another announcement of discrimination It’s saying straight bishops can have sex but gay bishops can’t. Celibacy is a gift from God. Some people are called to it, others are not. It’s not a second best option for second best clergy.”

The Rt Revd Graham James, Bishop of Norwich, (pic) said by way of explanation of the extraordinary announcement, that “The House (of Bishops) believed it would be unjust to exclude from consideration for the episcopate anyone seeking to live fully in conformity with the church’s teaching on sexual ethics or other areas of personal life and discipline.”

The challenge now is how the Church of England can engage in a mature manner and theological insight, rather than political expediency. It has engineered its own precipitous exclusion from the gay marriage legislation, with ‘religious freedom’ protected via a “quadruple lock” announced by Culture Secretary Maria Miller. Â This lock was forged by the government as a response to the vociferous opposition religious leaders within the established and the Catholic churches, to the idea of offering the sacrament of marriage to same sex partners. The “quadruple lock” effectively closes out the liturgy of the Church of England, its premises and its clerics from the performance of a marriage service for gay couples. The Equality Act itself will be altered so that a discrimination claim cannot be brought where there is a refusal on the part of any organisation or individual to marry a same-sex couple.

‘Crime against nature’ was an old English euphemism for sexual transgression. It is presumably these ‘crimes’ which an aspirant bishop will have to confess to, or deny having partaken of, as part of their assessment process, before an appointment can be made. The theological and ecclesial angst surrounding homosexuality on the part of religious leaders, emerges explicitly or implicitly in statements with a feint towards either the ‘unnaturalness’ of homophilia itself or its realisation in explicit sexual acts.

That would-be bishops who are gay must promise to stay celibate whether in a civil partnership or not in order to secure their appointment is an extraordinary and thoroughly unhelpful fudge. The fact that sexual congress is congruent with professed fidelity, which is what ‘validates’ sex for their ‘straight’ ‘married’ colleagues, and forms an integral part of building a relationship of companionship and self-giving love for any human being in a relationship configured by desire, regardless of sexual orientation, is ignored.

A theologically tuned-in leadership could find in all the recent energy emerging from gay and lesbian communities across the world, seeking parity in religiously or state sanctioned relationships a wonderful source of fresh insights into the ministry and praxis of their founder. After all, Jesus was not the offspring of a conventional heterosexual marriage, and his teaching on the nature of familial relationships was thoroughly disruptive of any model of ‘nuclear patriarchal household’ we might care to erect.

When we consider the nature of relationships now being entered into by gay people seeking parity through marriage, civil partnership, adoption and IVF rights, we see a vibrant display of what is an irreversible diversity, transforming wider society’s understanding of the legitimate relations of gender, sexuality and family. It is a pity that the leadership of the Church of England is currently struggling to find a way to interpret and bring any theological insight to how this diversity and life force streaming out of communities for too long silenced, degraded, humiliated, and demonised, is part of the movement of God’s creative, life affirming and transformational presence in the twenty first century.

It is simply not good enough for the Church to continue to play out at any level the transcript of ‘loving the sinner but hating the sin’. Â Any conception of homosexuality as some form of ‘abnormality’ chosen or inflicted, is embedded in an outmoded view of homosexual orientation fixed somewhere in the latter half of the nineteenth century, when Karl Maria Kertbeny first coined the phrase in 1868.

It is time that the Church of England, and all other religious organisations, took note of what a range of scientific disciplines ranging from anthropology, zoology, neurophysiology and psychiatry has disclosed over the last century. Homosexual desire which plays a central part in configuring a homophilic man or woman is part of the normal distribution of human society.

It is time that the Church of England played straight with theology, science and its own demographic.Â  Some clergy, some laity, some theologians, some bishops, some churchwardens, some would be ordinands, and some archdeacons are gay. It is time to address the way we live now without having to provoke a fresh searing satire from the hands of a contemporary Trollope, or to enforce any further suffering, shadow living, early retirements, blocked participation, half-truths, inauthenticity or needless stress on those in our communities who are gay.Â  It is time to get over old shibboleths, surmount ignorance, acknowledge the Body’s grace, review the church’s position on gay marriage before it’s too late and ordain those to the Episcopacy whom God is calling from the splendid diversity of those created, male and female, straight and gay in God’s image, without further prejudice.

As the Stonewall poster campaign has been declaring for the last four years on billboards around the UK – some people are gay, get over it.