Cambridge Rambling Club given a fascinating geology lesson during our recent fabulous walking weekend in Yorkshire by our walk leader David Peel, a retired glaciologist, who highlighted the impact the drought was having at a well known visitors’ spot called The Strid.

We looked down on to rocks that in springtime would normally have been covered by a surging torrent, several feet deep.

I thought it would good to share his thoughts with you, and this is what he says:

Near Bolton Priory, 57 stepping stones are needed to cross the River Wharfe. Only two miles upstream, I had hoped to show everyone a normally spectacular Yorkshire feature called the Strid. At this point, the river is squeezed through a channel up to 30 feet deep which is only 3-4 feet wide.
Over the course of several hundred thousand years,Â  the swirling action of the river has worn away a series of potholes which have eventually become linked together to form the deep chasm we see today.
At this time of year, the water normally rushes through the channel with great force, and whirlpools show evidence ofÂ  powerful undercurrents. It is indeed a notoriously dangerous place to linger.
And that is how I saw the Strid when I visited it last during April five years ago.
On a recent visit though, firstly, I felt disappointment, and then increasing concern as I peered down into the chasm and watched the river gently flowing through it far below its normal level. At this time of the year, the river should be in full spate after winter rains.
Instead, there has been below average rainfall across the region for several months and this has lowered the ground water levels and, in turn, has led to unusually early falls in the river level.
The Environment Agency has indeed just declared that parts of Yorkshire are now officially in drought and have voiced concerns about the well being of fish and other wildlife and the effects on people who use the waterways. 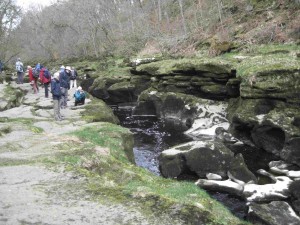 The Cambridge Rambling Club visit to the Strid, March 2012 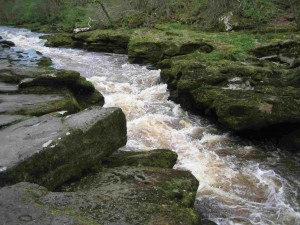 David Peel’s picture of the Strid 5 years ago with the river in full flow.