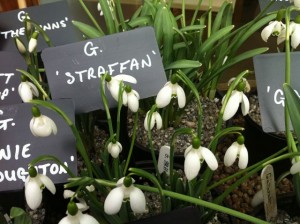 Anglesey Abbey’s beautifully designed Winter Walk was the first of its kind for the National Trust and the brainchild of its former head gardener Richard Ayres who had the vision to see its huge potential in attracting thousands of extra visitors throughout the year at a time when its gates were usually closed. I interviewed him about it on behalf of the National Trust for a feature in their magazine to mark his retirement.

I am fortunate to live close by and went along today and was amazed to see how many outdoor loving people were there; the NT was anticipating around 2,000 visitors today, on top of the 1,600 yesterday. It is hugely popular and I bumped into friends who had driven a couple of hours to savour the early spring blooms.

The huge variety of snowdrops – said to number more than 240 and continually increasing as they cross-pollinate – is one of its major attractions and and they carpeted the grass alongside sunshine yellow aconites, along with sprawling cyclamen and miniature irises which are both huge favourites of mine. There is still have another week or two left of flowering time if you would like to see these lovely blooms. But if you don’t get the chance to visit, then you can share my visit with these EveryTrail pics taken en route.

Thank you Richard Ayres. The National Trust and its tens of thousands of NT followers are truly indebted to you.

However, there is one mystery I would like answered if possible. After my walk I often enjoy a slice of their very yummy snowdrop cake which had decorations on its iced topping to resemble snowdrops using pistachio nuts. I couldn’t snowdrop cake in the tearoom today and when I asked about it, I was told that the kitchen staff were no longer allowed to use pistachios in recipes. Does anyone know why?