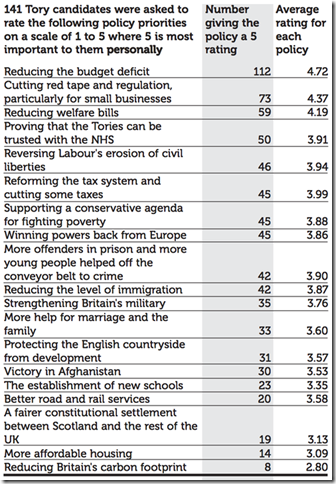 I was fascinated to read the results of the ConservativeHome survey of Tory candidates regarding their policy priorities. Disappointingly, they placed reducing Britainâ€™s footprint at the bottom of the list, an issue close to David Cameronâ€™s heart, and I hope it remains so, though he seems to have failed to have got the message across about this.

Itâ€™s no surprise that during our economic gloom, cutting the budget deficit comes top of the list, though Iâ€™m also surprised that reducing immigration doesnâ€™t come higher up, as well as the need for more affordable housing.

Letâ€™s hope Conservatives can succeed with the NHS, ranked fourth. A friend of mine had a call from Addenbrookeâ€™s Hospital, Cambridge this afternoon saying that her daughterâ€™s operation booked for tomorrow was being cancelled because they didnâ€™t realise it was their audit day. Unbelievable.

Tim Montgomerie outlines the survey on Radio 4â€™s Westminster hour. What do you think of these priorities?