Being the Soham Psychic 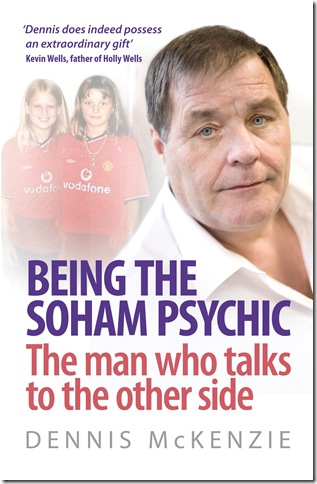 I can now tell you about the book I have been working on over the last year. A copy has just arrived on my doormat, which is a totally thrilling experience. And it is on a topic which is totally different to my normal line of work.

Do you believe in psychics?

When I am asked this, I reply that I believe in Dennis McKenzie, best known as the â€œSoham Psychicâ€ for the chillingly accurate readings heÂ  gave the devastated, grief stricken parents of Holly Wells when she went missing with her friend Jessica Chapman, and both girls were murdered. It was a tragic story which sent shock waves around the world.

Dennisâ€™ amazing life story â€“ as well as gripping accounts of his other paranormal experiences â€“ are being published on 3rd September by top publishers Headline. It is called Being the Soham Psycic, the man who talks to the other side.

This is a book which I have ghost written after meeting Dennis for a personal reading at his home near Cambridge. I took him at his word when he said I should step out of my comfort zone and take on a new challenge. â€œPerhaps I should write a book about you,â€ I said, as I walked out of his house and down his front path. He instantly agreed.

At the time of my reading back in December 2007, one of the cases Dennis had worked on was splashed in the national press and he showed me the headlines. It was about a teenage boy whose body had just been recovered from a lake weighted with concrete. His name was â€œHappyâ€ Kelly and he had been the victim of a gangland killing in Limerick, Southern Ireland. Dennis has helped many families who lost sons to gangland killings over there when they felt they had nobody else to turn to.

Dennis also told me about his visit to America with a documentary team to work on the terrifying case of a serial killer who had been murdering over 30 years and was still on the loose. This man was known as BTK because he bound, tortured and killed his innocent victims. Dennis was able to give police a totally different psychological profile which was found to match him perfectly after he was caught.

I instantly thought these stories would make a great book, and that his story was unlike that of any other psychic. I felt that Dennis, who had also been Womanâ€™s Own resident psychic, should tell his story to the world. It really is unlike any other psychicâ€™s book because Dennis speaks in a no-nonsense blunt and honest way which people appreciate, yet with compassion too. I believe he is extraordinary and possesses a unique ability to communicate with the spirit world.

The book also includes Dennisâ€™ experiences of transfiguration, reincarnation and regression.Â  I promise it wonâ€™t disappoint. It will be available from all the leading bookstores, as well as supermarkets and Amazon. It can also be ordered from my website by clicking the pic of the book cover at the top right panel of my site.

Many thanks to Carly, Josh, Helena and everyone else at Headline for doing such a great job. And thanks again to ace blogger, and superb author and ghost writer Richard Havers who helped make this happen for me by recommending me to his literary agent.