Sir Alan’s first task should be …. 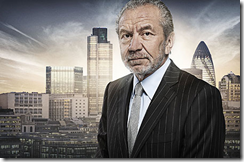 Sir Alan Sugar’s first task as the government’s new enterprise tsar should be to help secure jobs for our newly unemployed graduates with large debts around their necks.

They are not alone as the former Bank of England policy maker David Blanchflower has warned that 1 million people under 25 will be unemployed by September.

The National Union of Students is very concerned how many of their 300,000 graduates this summer will get jobs. These are the first generation of students to pay top-up fees and will leave university with thousands of pounds of debt during an economic downturn when nearly half of all firms have admitted that they will not be offering them any jobs.

I wonder how many of them will hear those two magic words: “Your hired!”

The NUS is pushing for MPs to address the issue of student debt urgently and has come up with its own radical proposals, including ending course fees and making payments according to their future earnings.

They propose a People’s Trust for Higher Education to which graduates would make a contribution, linked to how much they earn and how many academic credits they have attained. The actual proportion of earnings donated to the trust would vary on average from 0.3 from the bottom fifth of earners to 2.5% for the top 20% of earners. Contributions would be collected for a fixed period of 20 years and graduates would not contribute anything while earning less than Â£15,000.

I say full marks to our students for being very responsible in proposing alternative solutions about a very worrying issue, even if it may not be perfect. At the very least, I hope their ideas are considered by government and a dialogue begins to tackle this increasingly worrying issue.

I also hope that Sir Alan can use his influence in business to sponsor/recruit our debt laden graduates.