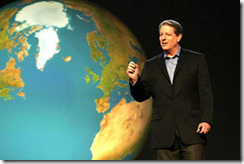 How long will it be before Al Gore is leading Barack Obama’s climate change programme?

The Nobel Peace Prize winner described his frustrations at being unable to persuade the Bush administration to take climate change seriously when I heard him speak in Cambridge.

“I will make a commitment that Al Gore willÂ  be at the table and play a central part in us figuring out how we solve this problem. He’s somebody I talk to on a regular basis. I’m already consulting with him in terms of these issues, but climate change is real. It is something we have to deal with now, not 10 years from now, not 20 years from now.”

Who better to lead on this than Gore? He will be inspirational.

Here is what Obama plans to do to combate climate change. He will move the U.S. away from petroleum as its primary energy source and towards renewable energy, advanced biofuels and efficiency and low greenhouse-gas-emitting technologies.

He plans to cap emissions such as carbon dioxide and auction greenhouse gas credits to encourage a fundamental transition away from high emitting industries to low-carbon alternatives. He believes such a policy would be more aggressive than any other cap-and-trade system proposed.

As part of that policy shift, renewable energy, natural gas, plug-in hybrid vehicles, and advanced electricity transmission are forecast to receive a major boost. Obama has proposed using $150 billion from the emissions auction to fund such low-carbon alternatives over the next decade.

I plan to be writing much more on climate change from now on. We need to understand and debate this very important topic.