Fish and chip suppers given a boost 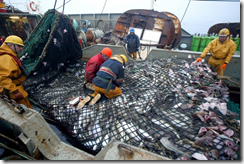 The plan was intended to help boost depleted stocks of white fish, but has been ineffective and had a ruinous effect on the fishing industry.

It meant that fishermen were forced to throw back, or discard, tonnes of healthy fish when they were abundant in catches, even though there is significant evidence to suggest climate change, and not over fishing, is the main cause of the problem.

"The current system of throwing back or discarding tonnes of healthy fish from abundant stocks, at a time of food shortages, is making the EU part of the problem, not the solution.

"Large numbers of our fisherman are being put out of business and there is strong evidence to suggest that global warming is to blame for the current cod shortages, not over fishing. The new proposals will attempt to overcome this by helping both fisherman and member states to implement cod avoidance programs while reducing the amount of perfectly healthy fish our ship are forced to throw back or discard.

“I support these new efforts to end the EU’s unreasonable obsession with cod stocks, an obsession that has had calamitous effects for the fishing industry by its cuts in cod quotas in the North Sea. I hope that it will help boost the eastern region’s fishing industry through what has been particularly challenging times.”