Where are our famous women artists? 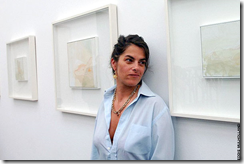 I heard a discussion recently on the Antiques Roadshow about

the lack of recognition given to women artists. At the same time, I had an email about Theresa May’s campaign for Equal Pay.

It seems extraordinary to me that art should have an element of sexual discrimination. Is that still the case today? The Antiques Roadshow expert said that women artists were now "on the up", which would indicate some discrimination.

How many famous women artists are there besides Emma Sargeant and Tracey Emin? Where are our female Grand Masters?

I have a postcard by my desk of the beautiful 18th century portrait artist Louise Elizabeth Vigee-Lebrun who was one of the first successful women artists. You can see her stunning self portrait. She was quite a sensation in her day and painted many distinguished figures of her day, including Mary Antoinette and Lord Byron. How many women artists have followed in her inspriational footsteps and achieved the same recognition?

Women in the past were not encouraged to become great artists. This article describes how the during the Renaissance, they were excluded from artists’ workshops and conventional forms of training. They were also not encouraged to draw the nude body. Instead they painted mothers and children and flowers – people and objects accessible to them – rather than "history paintings" of battles and so-called "worldly deeds."

Perhaps today’s struggling women artists would benefit by supporting Theresa May’s new campaign. This is what she says:

Despite it being the 21st Century, men are STILL getting paid 17.2 per cent more than women. This means that the average woman will lose or forgo a massive £300,000 over her lifetime. This pay gap does not only exist in the lower paid job sectors – full-time women earn less than full-time men in EVERY occupation.

I think this is wrong and I want to help change it. This autumn I am launching Theresa May for Equal Pay. Working with TV presenter June Sarpong, we want to help to stamp out the pay gap once and for all.

This Christmas, we will introduce the Equal Pay and Flexible Working Bill in Parliament. The Bill contains tough new measures which if passed, would help to stamp out the pay gap once and for all. But to make our Bill into law, we need all political parties to vote to for it in parliament.

If you are a female reader of this blog, do you get equal pay?