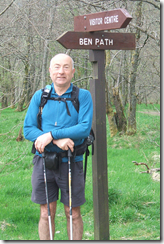 day of walking from Cambridge to Oxford, about 80 miles.

That’s a mere stroll in the park for Geoff, who is used to much longer and challenging routes across Europe, and often alone.

I don’t need to text him every day any more to check he is ok as he is in regular contact via Twitter and keeps his girlfriend Sally fully informed, who now joins him on some of his mammoth trips.

According to Geoff’s update on Twitter, last night was stormy and he slept in a tent after walking 49km, that’s 57463 steps. Let’s hope the weather is kinder tonight, but I know Geoff is used to roughing it in hostile conditions, he is not a wimp.

Wouldn’t it have been fun if someone had started the same walk from Oxford to Cambridge to see who would have reached their rival university city first? My money would have been on Geoff.

Meanwhile, Anne from Oxfordshire is visiting Sally in Cambridge, but their paths did not cross as she arrived the easy way on four wheels.