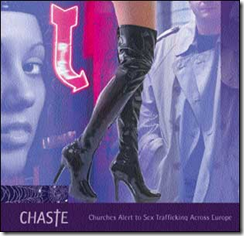 I had a very productive meeting with the dynamic Dr Carrie

She is thrilled that Home Office Minister Vernon Coker will be speaking at their major conference in London this month, which focuses on the demand for prostitution.

She is also thrilled with four recent anonymous donations from men who wanted to demonstrate their support, who feel equally appalled that so many women are forced into prostitution after being illegally trafficked.

The high profile conference, called Tackling Demand for Human Trafficking, is being held on Thursday, 24 January at the International Headquarters of the Salvation Army, London. Speakers also include senior representatives from the Swedish police, a representative from the nationwide police initiative, Pentameter 2 which has concentrated police efforts on unveiling the hidden abuse of trafficked women in brothels across the country, as well as sex trafficking experts from South Africa, Canada, Denmark and America. I shall be there.

Anyone who wants a clearer understanding of the horrific abuse experienced by sexually trafficked women should read the CHASTE book entitled Not For Sale. This is one chilling extract:

“I said I didn’t want to pole-dance any more. I didn’t like what I was doing. he then beat me up and raped me. I was sold to this guy who brought me to England – I was to work for him now. If I go back home, I won’t have a head or legs or hands, they will find me – I am very scared.”

How can anyone turn a blind eye to that kind of abuse? Four thousand women are being trafficked into the UK for sexual exploitation every year. CHASTE also provides much needed safe houses for women who have been rescued from brothels and sex slavery.

Changing cultural beliefs about prostitution is the huge challenge faced by Carrie and her dedicated team. I shall be doing my bit today by promoting the conference and making media calls.

*I’ve just come across this post by Harriet Harmen who Carrie has met to lobby on this subject, strongly urging our government to adopt the Swedish model where the man is criminalised when paying for sex, not the women, and they seem to be in total agreement. Unfortunately, there are no updates on the Labour’s deputy leader’s blog following her recent announcement to make it illegal to pay for sex.

Update 9 January: This post is listed as one of the best of the web Guardian online posts.