Who is Zineta, my new mystery friend? 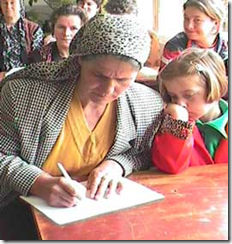 school children singing their Christmas carols outside, a cosy fire roaring in the room next door, I pause to think about my new friend Zineta, and the kind of life she is having in Bosnia.

Zineta Plecan has been paired with me through Women for Women International and their sponsorship scheme. It means I am paying around £17 a month for the next year to Zineta to help improve her life. She is my "sponsored sister", and I already feel a sense of responsibility towards her.

The charity is focused on helping women survivors of war and I am looking forward to learning about Zineta’s life and her family, and helping her in any way I can to make a difference.

I signed up after meeting its founder, the inspirational Zainab Salib, at a Conservative Women’s conference last month.  I like the practical aspect behind this charity, which provides these innocent war zone women survivors with an education and skills so they are trained to work or even start their own business.

The ethnic cleansing campaign carried out from 1992-1995 left thousands of Bosnian women coping with the loss of their families and communities and the profound psychological trauma and humiliation of sexual assault and torture. Throughout the war, rape was used as a military tactic with the official intent to demoralize and terrorize communities, driving women and others from their homes as a demonstration of the power of the invading forces.

In post-war Bosnia, women are still facing the brunt of economic and political hardships. Thousands of female-headed households are still internally displaced in Bosnia and Herzegovina. Women form the majority of the poor population, with limited economic opportunities or health services to deal with the consequences of the war. It’s important that women are helped and supported towards achieving a new life with prospects for themselves and their family.

I will share with you Zineta’s progress, I know nothing at all about her at the moment. Who knows, I may even surprise her with a visit.

If anyone is searching for an unusual, humanitarian Christmas gift, why not sign up for a "sponsored sister"? You can help make someone else’s Christmas very special too.