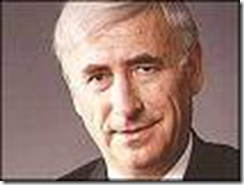 A week ago I wrote here about the disgraceful service I was experiencing from Tech Guys, who have had my laptop for two months and failed in that time to replace its broken screen or communicate with me what was happening. My experience with them was a nightmare.

Little did I know that it would end up being investigated by Lord Kalms (pic)himself. He is the life president and former chairman of DSG International which owns Dixons, Currys, The Link and PC World outlets. Tech Guys are based in PC World, as well as other outlets.

Unknown to me, my difficulty was brought to his attention by Iain Dale after he read my disgruntled post. I was amazed when I received this email early yesterday (7.17am) from Lord Kalms’ PA:

“I understand from Iain Dale that you have been having a problem with PC World. Lord Kalms has asked if you could let me know what has happened and perhaps we can help sort it out. If you would be kind enough to e-mail me with the details I will do what I can.”

This was followed up by a call later in the day from PC World team leader Stuart McArthur who checked and discovered that my laptop was, coincidentally, being returned to me yesterday. I had no idea this was happening and, as I was out, the driver left a card. I am hoping it will be re-delivered today. Stuart was very apologetic and admitted that the service I received was not acceptable. He offered me Â£100 in PC World gift vouchers by way of apology.

There has also been a hot debate going on at a PC Advisor forum on this sorry saga and the editor is considering running a story about it in their magazine.

As a result of this unpleasant experience, particularly so for my husband who made many frustrating calls on my behalf, it seems obvious that the customer service and communications side of Tech Guys needs to be reviewed, that they should consider how they can improve their internal and external communications and stakeholder engagement. I hope these serious shortcomings will be acted on instantly so others do not have to suffer similar disappointing experiences. Stuart did say that they would be followed up with the departments involved.

And I do hope so because not everyone is fortunate enough to have contacts or blog readers with friends in high places to call on!

This is a very competitive market where a good reputation is essential. I always maintain that the one thing you cannot buy is a good reputation, it has to be earned, and its value is priceless.

When I wrote my post last week, I deliberately included as many Tech Guys and PC World url links as possible to feed the Google juice. Sure enough, if you type the words Tech Guys complaints into Google, my posts are right at the top of the search engine. Why didn’t their media monitors pick up on this and respond? They should be closely following all conversations on the internet and instantly acting on them, like Dell and Microsoft.

Btw, please don’t all rush to Iain at once with your consumer complaints!

Update:Â  12.15pm, seeing is believing, my laptop has just arrived.