Let’s campaign for the Red Arrows 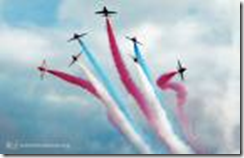 Were you shocked, like me, to learn that the Red Arrows have been banned from performing at the opening ceremony of the 2012 London Olympics – because they are too British!

If so, then please sign the following 10 Downing Street protest petition to try and get this ludicrous decision overturned.

The Arrows, officially named the Royal Air Force Aerobatic Team, have flown at 4,000 festivals worldwide. But the Department of Culture, Media and Sport decided last week that the jets were â€œunsuitableâ€? and â€œnot in keeping with the event as they were too militaristically Britishâ€?.

I would have imagined that we would be proud to showcase the best of what is British, that these daredevils will thrill our global visitors.

News of the ban has been condemned by my MEP Robert Sturdy, he feels it is outrageous, knowing how they are popular headline attractions at local airshows in East Anglia.

One protester put it in a nutshell when she asked in an email forwarded to me:

Do they think the Chinese will be worried that the Beijing Olympics will be too Chinese? I hope they are VERY Chinese. That’s surely the whole point of holding the Olympics in a different country each time?!?!

I remember last seeing the Red Arrows perform at RAF Mildenhall – what an awesome air show they put on there, sadly no more since the Iraq war. It was a Sunday and my son James hated the deafening noise of the overhead planes as they screeched close above us. I was forced to sit in the car and watch, while James hid as low as possible on the floor with his hands over his ears. I’m sure he would love them now.