Is Ruth Kelly going to be the next Margaret Beckett? 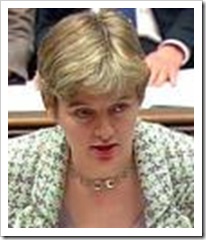 The reason I ask is because I remember

seeing Ruth Kelly sitting on the front benches looking very smug as Tony Blair made his final speech as Prime Minister last Wednesday. She must have known that her political future was safe – despite her unremarkable achievements so far as Secretary of State for Education and Secretary of State for Communities and Local Government and Minister for Women and Equality.

As the new Transport Secretary, I do not hold my breath that she will solve the problems of our gridlocked roads and overcrowded trains.

She seems to have the same kind of luck as Margaret Beckett, who sailed from one ministerial position to another, obviously knowing how to keep her nose clean and keeping in with the right people, without excelling in any particular area.

Having been top of Brown’s list for the heave-ho, I would not be surprised if Beckett decided the time was now right for her to retire and become a free-spirited caravan cruiser.

Let’s hope, for her sake, she doesn’t come across too many angry farmers who  remember too well her extraordinary gross incompetence over the single payments scheme which could cost the taxpayers a Â£300 million fine.

Not the sort of record that a Chancellor would find impressive. At least he had the guts to do something about it.