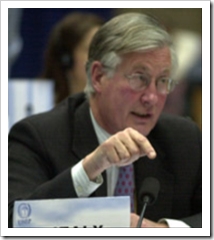 Daggers are already all but drawn in Labour’s

A campaign has also been launched on facebook called Stand Down Meacher by Labour blogger Grimmerupnorth, and has 125 members so far. It supports McDonnell as the only credible left candidate for Labour leader.

All-guns-blaring Meacher has a letter in today’s Guardian claiming that McDonnell has only 15 verbal pledges, compared to the 24 signed statements he has from fellow MPs.

And, just to twist the knife even further, Meacher adds:

“The figures make it quite clear that it is impossible for him to get anywhere near the 45 nominations required. That is all the more the case when his supporters have admitted that nearly all of them would transfer to me if he withdrew, while only a handful of my supporters would transfer to him if I withdrew.”

McDonnell has retaliated by accusing Meacher of making “some outrageous verging on the delusional statements,” that in fact Meacher’s support is dwindling. He says on his blog:

“The problem is that Michael Meacher will not reveal even in the strictest confidence the list of nominations he claims to have secured. His only known supporters – Alan Simpson, Kelvin Hopkins and even Michael’s own personal assistant – have confirmed that they have not seen any list

“Over the last month Michael Meacher has claimed 50 nominations secured. This then went down to 40. It is now down to 25. In Saturday’s Guardian it suggested what most believe to be accurate that he has only two firm commitments. In the Guardian today he claims to have signed statements from 25 MPs confirming that they will nominate him. Nobody has seen these statements.”

Meacher even believes that Brown’s supporters want to avoid a contest against him because of Brown’s poor record in office:

“But by playing down my support so absurdly and by exaggerating his support beyond anything that is realistic, Gordon Brown’s supporters are certainly making one thing crystal clear: they want to avoid a contest against me at all costs, and for good reason. His record on the environment, inequality, privatisation and PFI, means testing and Trident are all issues on which they fear a challenge from me. If there is to be a contest, they want John McDonnell to be their opponent.

“That is indeed the reason I’m standing – as the one centre-left candidate who can secure enough of the nominations to ensure that a debate does take place about the future direction of the government and that party members do have a choice of their leader, not have one imposed on them.”

In desperation, McDonnell has made this appeal:

“If there is anyone who feels they can exert any influence over Michael Meacher at this stage please do all you can to assist. His behaviour may well mean that we run the risk that no Left candidate gets on the ballot paper.”

How will this undignified row end? It is making Labour a laughing stock.