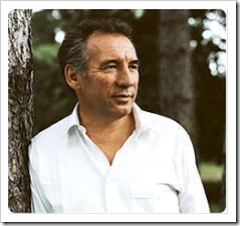 I met the charming Guillaume Du Gardier at the blogging conference this week and asked him about the French presidential election. He has just recorded his views on video about how influential the internet has been and the different online tactics used by leading contenders Nicolas Sarkozy and Segolene Royal for David Brain. It’s worth listening to, and you can enjoy his sexy French accent too.

He told me there could be a surprise, that Francois Bayrou, a centrist candidate who wants to bridge the “prehistoric” left-right divide,” could still gain more support. politicalbetting.com is not so sure, but the L.A. Times describes how the farmer-turned-intellectual-turned politician has shaken up French politics. It’s certainly going to be gripping.

Bayrou has challenged his leading opponents for an internet debate before the first round of voting on April 22. While Royal and Le Pen accepted, Sarkozy refused on the grounds that French election laws would make such an event impossible, he also believes the debate should include all 12 candidates or none at all. Can you imagine how long and drawn out that would be! I wonder if online political debates is something we will push for in our next general election. I expect Bayrou is seeking it as his poll ratings have taken a dive and was hoping bloggers would rise to his rescue.

I think it’s extraordinary that an internet debate has even been proposed for the presidential election, such is the power that politicians feel the internet holds. The politicians’ websites have been very powerful campaigning tools, as Guillaume describes in his video. Just check out the candidates’ websites, Sarkozy even has his own TV station, the websites for Royal, Bayrou and Le Pen, which seem less colourful in comparison, though unfortunately, my French is not good enough to understand the content.

BBC correspondent Mark Mardell writes here about how the French elections are being fought in blogosphere. It raises the important question about whether politicians should be spamming the public, if it will alienate them, though that does not seem to have happened in France. This is what Mardell says:

“According to Le Monde 27 million French people use the web everyday and 40% of them say it’s their main source of political information. When Sarkozy spammed three million people, a lot of them did bother to click on the link rather than hit the delete button. It’s claimed 30,000 people joined the UMP as a direct result. How’s that for political communication?”

These are the outsiders standing in the election, we must spare a thought for Arlette Laguiller of the Workers’ Struggle, the retired bank clerk has taken part in every presidential election since 1974. Can anyone beat that perseverance? Or does she simply not know when to give up?

And French internet politics is such good fun too, please tune in and enjoy this cheeky cartoon video of Sarkozy and Royal in a compromising position, and you can also watch Disco Sarko dancing to Staying Alive.

Update: Croydonian tells us which French stars are supporting Sarko and Segolene.

Have a very happy Easter break.