I made my TV debut this evening 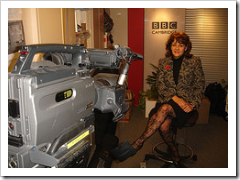 You just never know whose reading your blog. And so it was that a normal day ended with me taking a late afternoon call from BBC News 24 asking me to appear on TV within a couple of hours to talk about Jon Snow’s refusal to wear a poppy while reading the news.

I had been selected because of the forthright views expressed on my blog. The original idea was I would form part of a panel explaining why I felt

Jon Snow was wrong, only they couldn’t find anyone to defend him, so I was on my lonesome.

As readers of my blog will know, I have a fear of public speaking and I ummed and ahhed, worried that I would dry up – after all, this was live TV, there would be no second chances.

But I decided to go for it, having missed out previously, and a taxi soon arrived to take me to the BBC studio in Cambridge.

I was fitted with a mike and an earpiece and the camera was set up so I just stared into it and answered questions filtered through to me via the earpiece. It’s hard to remember all the questions, but it did sound like they were trying to trip me up all the time, and I hopefully avoided it.

At the end of the interview, I was really pleased with myself for having done it. What I find amazing is that I am suddenly asked to appear on TV simply because of my blog. The very nature of my work means I push others forward for media interviews, and now I am being sought for my views as a blogger.

And I was kicking myself for not sharing this news with my friends in blogsphere so they could have tuned in. It was my five minutes of fame – well more like three minutes, I think.